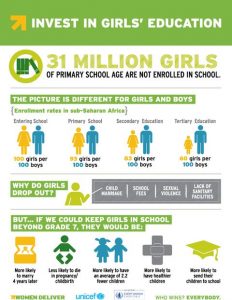 Education is one of the most critical areas of empowerment for women. It is also an area that offers some of the clearest examples of the discrimination suffered by women.

Offering girls a basic education is one sure way of giving them much greater power – of enabling them to make genuine choices over the kinds of lives they wish to lead. This is not a luxury.

The Convention on the Rights of the Child recognises that every child has the right to go to school to learn. That right begins in early childhood, which is one of the reasons why the Sustainable Development Goals (SDGs) call on Governments to “ensure that all girls and boys have access to quality early childhood development, care and pre-primary education.”

Each year, UNICEF’s flagship publication, The State of the World’s Children, closely examines key issues affecting children. The 2016 report, “A fair chance for every child” includes supporting data and statistics and is available in French and Spanish, Arabic and Chinese language versions.

Despite great progress in school enrollment in many parts of the world, the number of children aged between six and eleven who are out of school has increased since 2011.

About 124 million children and adolescents do not attend school, and two out of five leave primary school without having learnt to read, write or do basic arithmetic, according to the 2013 data.

This challenge is compounded by the increasingly protracted nature of armed conflict. Nearly 250 million children live in countries and areas affected by armed conflict, and millions more bear the brunt of climate related disasters and chronic crises.

“When we provide education, shelter and protection for children caught in conflicts, we help mend their hearts and minds – so that someday, they will have the ability and desire to rebuild their countries,” says UNICEF.

In addition to educated women having a happier, healthier life, there are important benefits for society as a whole:

Over recent decades there has been significant progress in girls’ education but what would it take to improve girls’ access to education?

Throughout our Federation Soroptimists recognise the value of Educating, Empowering and Enabling the girl child and do this through their project work.

A number of Clubs sponsor girls’ education to ensure that the girls stay at school as long as possible. This will increase their chances of delaying marriage and reduce the number of children produced.