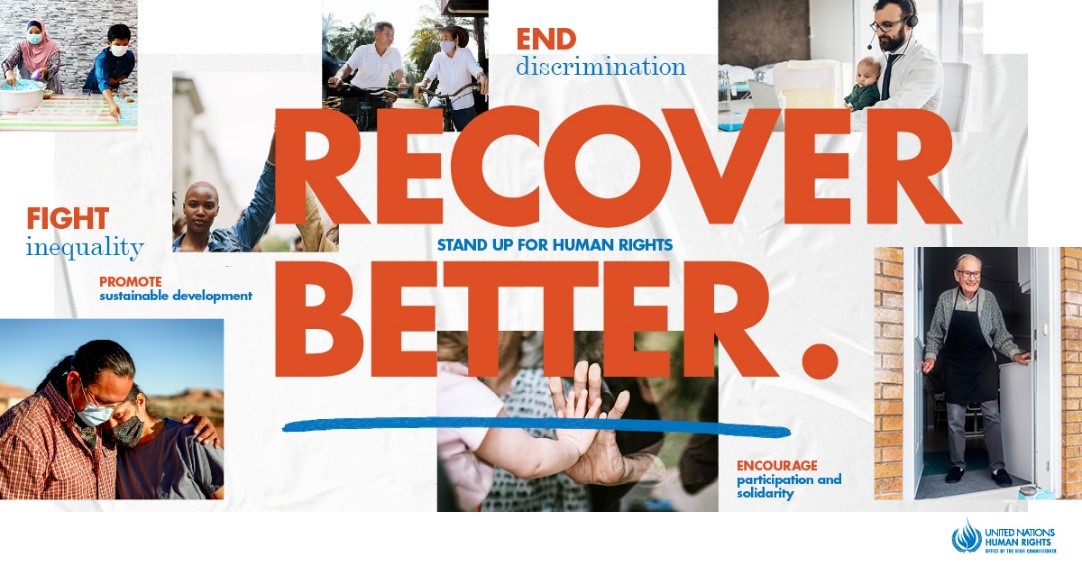 On 10th December 1948, the United Nations General Assembly adopted the Universal Declaration of Human Rights (UDHR), to which all human beings are entitled regardless of race, colour, religion, sex language, political or other opinion, national or social original, property birth or other status. The document has been translated into more than 500 languages and is the most translated document in the world.

As Soroptimists, I believe it is important to note that there were some key women who shaped the Universal Declaration: 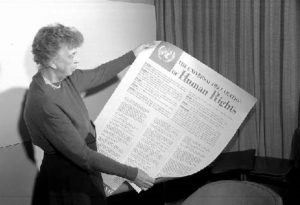 Eleanor Roosevelt, first lady of the United States of America from 1933 to 1945 (pictured above), was appointed in 1946 by US President Harry S Truman as a delegate to the United Nations (UN) General Assembly.  She served as the first Chairperson of the Commission on Human Rights and played an instrumental role in drafting the Declaration.

Hansa Mehta of India, who was the only other female delegate to the United Nations Commission on Human Rights in 1947-48, is widely credited with changing the phrase “All men are born free and equal” to “All human beings are born free and equal” in Article 1 of the Universal Declaration of Human Rights. She was a staunch fighter for women’s rights in India and abroad.

What is the relationship between Human Rights and the Sustainable Development Goals?

This year the COVID-19 pandemic will have a significant impact on the way in which we commemorate Human Rights Day and the theme for 2020 is ‘Recover Better – Stand Up for Human Rights’.  The pandemic has highlighted the many inequalities that exist in the world and exposed weaknesses in our systems in applying basic human rights to tackle exclusion and discrimination.

How can Soroptimists commemorate and support Human Rights Day?

There are many ways in which Soroptimists can and do support the thirty articles contained in the UDHR by carrying out project work in the following key areas: 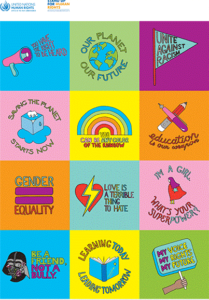 Some Soroptimist clubs work with their local schools on a range of educational initiatives and some have formed school clubs. An excellent introduction to human rights for school students is the Illustrated booklet of the Universal Declaration of Human Rights which includes a foreword by former UN Secretary General, Ban Ki-moon, and introduction by former UN High Commissioner for Human Rights, Zeid Ra’ad Al Hussein. This booklet together with the stickers (pictured) and posters developed for 2019 could be used by clubs wishing to run a workshop in a school.

Antonio Guterres, UN Secretary General, writing on the occasion of the seventy-fifth anniversary of the United Nations earlier this year in his document ‘The Highest Aspiration – A Call to Action for Human Rights’ and referring to Gender Equality and Equal Rights for Women noted:

“There is no such thing as human rights for all while half the global population is subject to the levels of violence, misogyny, exclusion, entrenched inequalities, economic disempowerment, and multiple forms of discrimination that many women and girls face every day.”

It is more important now than ever that when considering human rights, we support our President’s mantra: 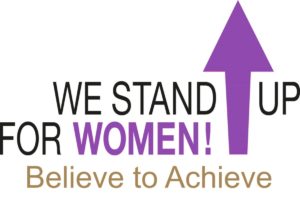