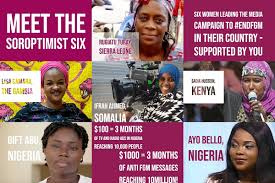 The first project of SI President Sharon’s Appeal is a partnership with the ‘Global Media Campaign to End FGM.’

Global Media Campaign is a web of 375 media activists, who have been trained in advocacy work and how to use social media platforms to increase the visibility to their work, across 7 countries broadcasting directly to their communities where girls are cut. This new generation of digitally literate young campaigners on the ground are best placed to end FGM in their communities. What’s more, with relatively modest support, they can and are making significant change.

After national media campaigns; people are talking out loud about FGM, leaders are banning FGM and mothers are making the decision to no longer cut their daughters. After the first campaign evidence confirmed 1 in 4 mothers have responded declaring they will no longer cut their girls. The targeted audience also includes men, raising their awareness of the risks of FGM to their daughters, sisters, future wives etc.

The President’s Appeal will support this campaign by not only funding the activism work, but also by adopting some of the activists who work for GMC and following their journeys and hearing their stories. Furthermore, SI Clubs and members based in African countries where GMC carries out its activities can involve themselves at the grassroots level.

For more information on the campaign and individual advocates, please visit https://www.soroptimistinternational.org/members-area/roadtoequality/