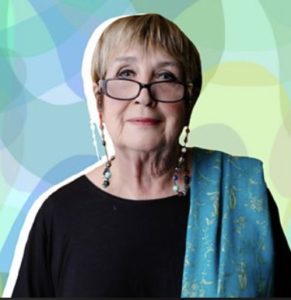 I felt in good company the other day. I was thinking about this being my last month as SIGBI Federation President and all the achievements we have had over this last 11 months when Radio 4’s Women’s Hour came on and it was presenter Jenni Murray saying “Goodbye” after 33 years with the programme.

She had a few guests with her and one by one the guests congratulated her and the programme for having provided the space for women’s issues to be discussed publicly and for holding a mirror up to society and providing a platform for demanding change. Helena Kennedy QC, who was one of her guests, was talking of how years ago Domestic Violence and rape were shrouded in secrecy or seen as the woman’s fault or a man’s rights. She recognised that the Women’s Institute, Townswomen’s Guild and Soroptimists took these issues forward and contributed to changing attitudes and getting it on the agenda.  It did my heart good to hear us mentioned.

We have been raising awareness, advocating and acting on these women’s issues for many years but as Jenni Murray and her guests agreed… “there is still a lot to achieve.”

I like to read the UN News and was drawn to this article from Phumzile Mlambo-Ngcuka. She emphasised the need for women’s leadership, including young women, in efforts to build back better after the pandemic. “Women and the people of the world are demanding these changes”, she said in a pre-recorded statement. 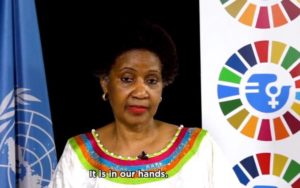 “This is the time for disrupters, young and old,” Ms. Mlambo-Ngcuka continued, saying it is time for actions to change the course of history for women and girls, especially women between the ages of 25 to 34 who are increasingly more likely to live in extreme poverty than their male counterparts.

“It’s time to bring an end to discriminatory laws, norms and homophobia, to end men’s violence against women and girls, and make a concerted effort to put women at the heart of climate justice.”

There is an opportunity to ‘Build Back Better’. This is the start of our centennial celebration of Soroptimism. Our efforts have taken us to where we are now. Let us use our role models, the woman and men who inspire us to unite us in this push for diversity, equality and humanity.

Thank you all for all you do and will continue to do to make the difference to the lives of women and girls.