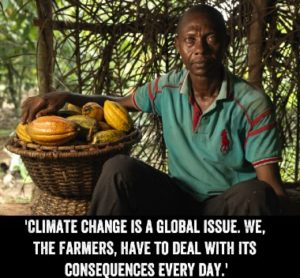 This time next year, world leaders will be coming together in Glasgow for a global summit that could make or break efforts to tackle the climate crisis.

But we can’t wait until next year to stand with those farmers and workers already feeling the worst effects of that crisis. Now is the time to push for radical, urgent action on a global scale. It’s time to sign the Climate Declaration.

By choosing Fairtrade, we’re choosing to put more power and more moneyin the hands of farmers and workers, as they work hard to adapt to a rapidly changing climate which brings new challenges every day.

But by working together we can do even more, and with this joint Climate Coalition declaration – already signed by over 100,000 people – we can convince more businesses, politicians and members of the general public that we need urgent action.

All parts of our Fairtrade movement are already getting involved.

Producers of brilliant Fairtrade products like Ben and Jerry’s have joined us in signing the Climate Declaration.

They’re also marking their commitment to tackling the climate crisis by launching Save our Swirled NOW! It’s a new look for their non-dairy coconutterly caramel flavour with swirls of caramel cookies and chocolatey chunks (complete with Fairtrade ingredients delivering a fairer deal for farmers and workers of course.)