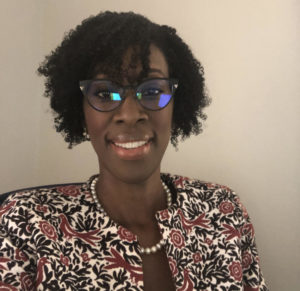 CSW is something that has always been very high on my bucket list as something I needed to attend, if even at least once in my lifetime. However, for various reasons it was never possible for me to actually get the necessary time off to fly to New York at this time of year, and so once it became fully virtual this year it was a complete no-brainer that I would attend.

I’ve always heard persons share their experience of the mad rush around Manhattan moving from building to building and room to room, noting also that this usually took place in the winter. I have also heard many share that attending your first CSW without a “seasoned” attendee or mentor could often be quite the challenge. As such, even though it’s virtual, I set aside an entire day to familiarize myself with the website and how the events could be accessed as well as ticking off the events that were of interest to me just to make sure I noted the times in my calendar.

Finally, I attended my first event today. It was titled: Women’s empowerment at the UN and in the G20: policies to support women’s leadership and talent and to fight gender-based violence. The main focus of the session was around women’s employment and work life balance, their educational and employment choices, the gender pay gap and particularly how these issues contribute to continued gender-based violence. There was also much discussion around how these issues have been further compounded by the Covid-19 pandemic and how can these issues be addressed moving forward.

The panelists comprised of a cross-section of UN speakers, Corporate Sector representatives and also Governmental representatives. While I sat listening to these speakers from all across the world through my computer screen, I couldn’t help but feel the energy and purpose as these women shared their views of how the gender gap impacts women and by extension their families and continue to place them in a position to be exposed to gender-based violence as a means of survival. While it is hoped that by 2030, the Gender Employment Gap can be closed by at least half, it was generally agreed that we are a long way off from this and there is much to still be done.

A line which stood out to me was “Men will be finding solutions for women without women being a part of the conversations”. It just reiterated the fact that as much as we are aware of the inequalities which exist, we continue to largely have men at the helm as decision makers. However, I didn’t leave this talk without hope. I left with a renewed purpose and a belief that as women we are stronger together, and that once we continue making our voices heard, we can grow closer to achieving the equality which we deserve. 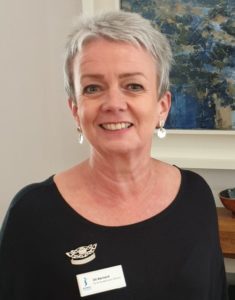 I am not a young nurse, not even a nurse, but I have a daughter who has just started out in her nursing career and so the title of this event today resonated within me.

There are well over 23 million nurses around the world, led primarily by older, experienced leaders, comfortable in their roles and reluctant to face challenge and create change.  Yet change is what is needed for the world to recover from the impact of Covid-19 and to achieve its Global Health Goals.

This was the opening message which came out of today’s 65th CSW session on “Empowering Early Career Nurses as Decision Makers and Leaders”.

A recent global survey showed that younger nurses had the expectation that they would have to work their way up to leadership roles – a position for much later in their career.  For this to be anything different it was clear that leadership in nursing needs to rethink its profile!

At today’s CSW65 event, 2 inspiring speakers showed very clearly that young, assertive people are there ready to bring in the change which is needed.

Munashe Livion Nyika started his nursing career in 2016 and became a passionate advocate for change within his community in Zimbabwe.  This drive and passion have allowed him to become a Nursing Now Board Member and a Global Young Nurse Representative.

Dania Itani Mousa has used her nursing career to become, at the age of 21 a UN Youth Representative.

They have both showed courage and willingness to become agents of change, to talk about the importance of empowerment; the need to be given a voice.  They both inspire but are also inspired.  They both recognise that networking, collaboration, passion and courage to speak out, leads to early career nurses being the catalysts and agents of change. They have removed the ladder towards leadership…they have put themselves forward and jumped!

Not all senior leaders deny the need for change: The event’s other 2 speakers, Elizabeth Madigan, CEO Sigma Theta Tau International Honor Society of Nursing and Barbara Stilwell, Executive Director of Nursing Now, would have been the 2 younger ones in their day; embracing the need to continue to learn, to continue to challenge yourself, to find courage to try the new, to move out of your comfort zone (it’s good to feel comfortable about feeling uncomfortable!).

For change to happen young nurses need to be provided with the support to have the courage to speak out, to be able to grow personally and professionally, to be encouraged to speak about the world they want to see, in a culture that welcomes it, with a strong platform to do this on.

23 million nurses.  23 million voices.  There is so much potential across the globe to improve world health, to encourage gender equality, and promote economic empowerment.

Young, early career nurses are ready … in their words “We can change the World” … and after today, I think they will! 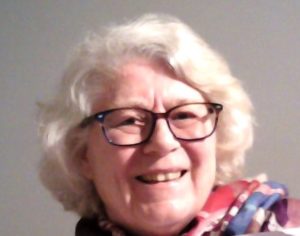 As a ‘rookie’ to CSW, I dipped into several formal sessions yesterday to a get a ‘feel’ for finding my way around the various virtual platforms.  But today, was my first complete session.

So, why did I choose this parallel session?  I thought it might focus on modern slavery about forced and child labour in the garment industry in South Asia.   How wrong I was! 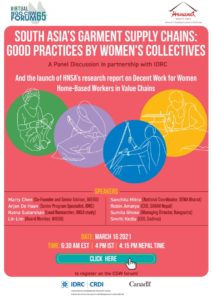 It turned out to be a panel discussion by Homenet South Asia (Network of Homebase workers in South Asia) (HNSA) and Canada’s International Development Research Centre (IDRC).  The session also launched HNSA’s research report ‘Promoting Decent Work for Women Home Based Workers in Value Chains: Cases from India and Nepal’.

The speakers explained what had happened in some parts of South Asian countries over the past years to set up co-operatives of home women workers (mostly in embroidery, weaving and knitting initially) as such workers were at the bottom of the value chains.  Lone workers were more isolated and were subject to greater exploitation.

The artisans are the owners of the social enterprises, not just workers and they have a say in the enterprises.  How empowering is that for all the women involved?

The women home based workers have increased their self esteem and now bring between 9% and 38% of income to household income on average.  The men’s roles have changed in the communities where they are now sharing in the household tasks eg childcare.

The strength of these social enterprises is that they have reached out to women from poor households and/or living in remote areas, who may or may not have learnt traditional skills from the family; to impart new skills and/or strengthen older ones; and to integrate them into global or domestic value chains.

There is an increasing consciousness among consumers in high income countries — “Who made my clothes?” — thus putting pressure on brands (local, national and international) to follow ethical and/or Fair Trade practices.  This has led to the introduction of company codes of conduct and corporate social responsibility initiatives.

Social enterprises are helping to build back better and the main challenges are: balancing social and economic goals; maintaining strong bonds among the workers; handing over to the next generation; investing in market driven design (contemporising traditional designs).

It really was a celebration of women working together to achieve.  Now where have we heard that before?