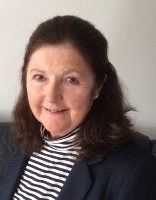 As this was my first CSW, I was keen to ensure that I made the most of the opportunities available to heighten my awareness of the issues affecting women and girls globally and to gain knowledge and inspiration for future Programme Action work.   Attending CSW live in New York and network with like-minded women must be an incredible experience but, as a newcomer, being able to research the sessions on offer and attend them online enabled me to gain a clearer perspective of the overall event.

The following sessions I found to be most interesting and informative:

Leaving no child behind: Ending social discrimination that makes children vulnerable to trafficking

Members of ECPAT shared some of the tools they use to work with schools noting that the COVID19 pandemic had exacerbated underlying vulnerabilities for many children, especially those from poor families where domestic abuse was evident and LGBT students.

Breaking Paradigms: Local Women Peace Initiatives to Promote the Full Participation of Women in Decisions Related to Peace and Security.

This webinar explored the ways in which women have fought hard to gain a place at the peace table.  The example given was the efforts of women in Israel and Palestine to bring about a peaceful solution as they did not want any more fighting.

A highly informative session which addressed the issue of women’s safety in public places.  Of particular significance was the SAFETIPIN project based in India, which aims to make cities safer by providing data collected through technology tools and apps to its users.   Mapping exercises have been carried out in Delhi and  Bhopal with the project adopted in 16 countries and 65 cities.

Closing Session of CSW65 and opening of the 66th Session

In the final session of CSW65, His Excellency Mr Mher Margaryan (Armenia) Chair (Eastern European States Group) referred to the Draft Conclusions noting that we are living in unprecedented times and the challenges presented by the COVID19 pandemic make it more important than ever that an agreed outcome be reached.

UN Women Executive Director Phumzile Mlambo-Ngcuka called for the resolution of problems that women and girls have faced over generations.  She noted that it was her last session of the Commission on the Status of Women and she thanked everyone for their support, counsel, and stewardship.

HE Mr Mher Margaryan then closed CSW65 and introduced the Chair of CSW66 and CSW67, Her Excellency, Ms Mathu Joyini, from South Africa. HE Ms Joyini quoted the words of Nelson Mandela in his first State of the Nation address in 1994:

“Freedom cannot be achieved unless women have been emancipated from all forms of oppression… Our endeavours must be about the liberation of the woman, the emancipation of the man and the liberty of the child.”