As we approach the end of the year and start to reflect on the main issues the world has faced during the past twelve months, observing Human Rights Day gives us the opportunity to consider those which have had the greatest impact on us.

The UN theme for Human Rights Day this year is ‘Equality – reducing inequalities, advancing human rights’ and it relates to Article 1 of the Universal Declaration of Human Rights which states “All human beings are born free and equal in dignity and rights. They are endowed with reason and conscience and should act towards one another in a  spirit of brotherhood”.

The main issues of concern which come to mind are the COVID-19 pandemic, climate change, areas of conflict in the world and modern-day slavery.

Considering each of these:

COVID-19 Pandemic – following the emergence of this pandemic in early 2020, we all hoped that by the end of the year it would be under control.  Sadly, this was not the case as it spread quite rapidly throughout the world and it was not until earlier this year that a vaccine was approved which would help to save lives by reducing the severity of the symptoms.  However, whilst the vaccine has indeed achieved this, the fact that it is not readily available in the poorer nations of the world is a violation of human rights leading to inequality and discrimination.

UN Human Rights High Commissioner Michelle Bachelet referring to the shortage of vaccine provision for developing countries said, “Equality means that we embrace our diversity and demand that all be treated without any kind of discrimination.”

Climate Change – the various elements of climate change resulting in environmental degradation, pollution, nature loss, rising sea levels, etc., impact disproportionately on those in vulnerable situations. They not only increase existing inequalities and negatively affect the human rights of current generations, but also those of future generations.

In a report issued prior to the recent COP 26 (Conference of the Parties) in Glasgow, Amnesty International outlined recommendations to States noting that the climate crisis is a human rights crisis. They urged states to take bold measures on emission reductions, climate finance, loss and damage, carbon reductions, climate finance, loss and damage, carbon trading mechanisms and Action for Climate Empowerment to meet their human rights obligations and to protect the human rights of all, now and in the future.

The Office of the High Commissioner on Human Rights (OHCHR) promotes a human rights-based approach to climate action in line with the 2030 Agenda and the Paris Agreement on Climate Change.

It is vital that UN States adopt ambitious adaptation and mitigation measures that are inclusive of all communities throughout the world which are affected by climate change. This was echoed in the words of Antonio Guterres, UN Secretary General, at the opening ceremony of COP26 when he said  that funding towards climate action must be a priority and there needs to be more public and private finance, stressing that multi-lateral agreements between banks is essential. Calling for greater support for developing countries, he said that COP26 must be a moment of solidarity. 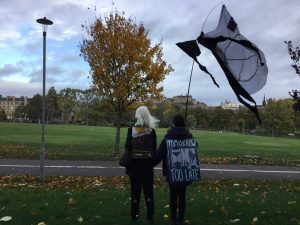 Whilst world leaders and delegates from a wide range of organisations were meeting in the Blue Zone at COP26, demonstrations were taking place around Glasgow by organisations keen to exercise their right to freedom of thought on climate action in accordance with Article 19 of the Universal Declaration of Human Rights. Many feared that little or no action would be taken following the conference and they were keen to ensure that their voices were heard.

Areas of conflict in the world – Afghanistan, Iraq, Syria, Yemen, Somalia and Mexico are just some of the countries where human rights are being seriously violated. In these countries alone over three million people have been killed, many thousands injured and displaced from their homes eventually being forced to leave their countries and become refugees. In all cases there has been a clear violation of Articles 3 and 5 of the Universal Declaration of Human Rights

On 19th October we were reminded of the plight of refugees, with the arrival in Folkestone, Kent, of a giant puppet named Little Amal representing a child refugee who had travelled some 8,000km (4,971 miles) across Europe from the Syrian border. Amal, 3.5 metre (11ft 6in) tall, was on a journey called The Walk and the project involved the international theatre company Good Chance and Syrian artist duo UV Lab. 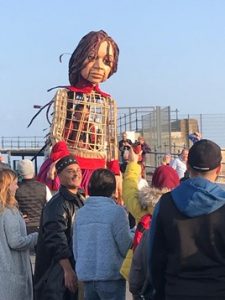 After leaving Folkestone, she went on to Dover and then Canterbury, where she walked through the streets and then entered the Cathedral to meet the Dean of Canterbury Cathedral, who described the encounter as extremely moving. After leaving Canterbury she continued to London and Oxford, finishing her epic journey in Manchester on 3rd November.

Modern day slavery – in the recent 2021 UK Report on Modern Slavery, Rt Hon Priti Patel MP, Home Secretary, states “It is horrendous to contemplate the fact that this despicable crime endures. Eradicating modern slavery is a moral imperative and a continued priority for the UK Government”. The UK has led the way on modern slavery with the slavery strategy being developed in 2014 followed by the landmark Modern Slavery Act in 2015, which has been emulated in several countries.  Since then, much progress has been made but the nature of human trafficking has changed significantly, as has the UK Government’s understanding.

In 2014, the number of potential victims referred to the National Referral Mechanism was 2,340 and the final figure for 2020 is likely to exceed 10,000. The profile of victims and the worst threats have changed with labour and criminal exploitation now the most prevalent forms of slavery identified in the UK.  The number of child and male victims has also increased.

Unfortunately, many of the people arriving in the small boats crossing the English Channel every day are often victims of modern slavery having started out as refugees or asylum seekers. On 24th November, tragically twenty-seven people, including pregnant women and three children, died as their boat capsized – only three people survived.

The above are just some examples of human rights violations – there are many more and it is important that as we commemorate Human Rights Day this year, we are mindful of these violations and that through our work as Soroptimists we strive to bring about change through our lobbying, our advocacy and our programme action work.