9th AUGUST commemorates the International Day of the World’s Indigenous Peoples. It marks the date of the inaugural session of the Working Group on Indigenous Populations at the United Nations in 1982.

This year’s theme is Leaving No One Behind: Indigenous peoples and the call for a new social contract. 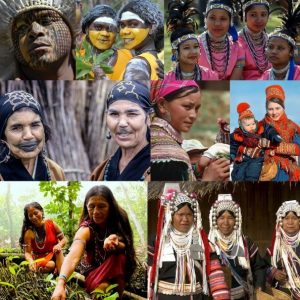 Who are Indigenous People?

There are around 476 million Indigenous Peoples worldwide spread over 90 countries, representing 5,000 different cultures and 7,000 languages. They are distinct social and cultural groups that share collective ancestral ties to the lands and natural resources where they live, occupy or from which they have been displaced. The land and natural resources on which they depend are deeply linked to their identities, cultures, livelihoods, as well as their physical and spiritual well-being.

Why do we use the word “Indigenous”?

Indigenous Peoples can surely be considered the original natural inhabitants of their respective regions like the so-called ‘native Americans’, the original dwellers who were marginalized by the massive migrant population from Europe that swept across the continent. Through power and might, the migrants gradually became the mainstream dominant population. History is witness to several blatant instances of the deprivation and exclusion of original populations, e.g. the Aboriginals in Australia and the Maoris in New Zealand.

In what ways have Indigenous Peoples been unjustly treated?

Many governments recognize only a fraction of the land as legally belonging to Indigenous Peoples. Even when Indigenous territories are recognized, protection of boundaries are fragile. There is insecure land tenure which drives conflict, environmental degradation, and hinders economic and social development. Thus cultural survival and the preservation of vital traditional knowledge systems are threatened.

In addition, misguided perceptions of social justice saw hundreds of boarding schools being established in the late 19th century across North America, to assimilate the Indigenous Natives to European-American culture by eliminating traditional indigenous languages, ways of life and identity and replacing them with mainstream American culture. The repressive nature and brutality of this system are still making headlines today.

In general, Indigenous Peoples often have inadequate access to basic services and face multiple barriers to social, economic and legal opportunities. The world has witnessed in recent times how the indigenous Rohingyas in Myanmar were systematically denied citizenship. In addition, brutal tactics of ethnic cleansing have driven hundreds of thousands of terrified Rohingya refugees to flood into neighbouring Bangladesh creating an inhuman displacement of a community of enormous proportions.

This legacy of inequality and exclusion has made indigenous communities more vulnerable to the impacts of climate change, natural hazards and disease outbreaks. Vulnerabilities to the Covid-19 pandemic are exacerbated with the lack of access to health, water and sanitation systems, the mobility restrictions that have negatively impacted their livelihoods and well-being. In such settings, we can only imagine the kind of sufferings that women and girl children endure.

While Indigenous Peoples own, occupy, or use a quarter of the world’s surface area, they safeguard 80 percent of the world’s biodiversity. They hold vital ancestral knowledge and expertise on how to adapt, mitigate, and reduce climate and disaster risks. The resilience of these people is outstanding. They are no strangers to pandemics and epidemics; yet measures to address these crises have often excluded them. In the context of the current COVID-19 pandemic, there is an opportunity to work through traditional authorities and healers of Indigenous Peoples to provide additional and perhaps unique information on disease prevention.

What can the Soroptimists do?

In the light of the Sustainable Development Goals (SDGs) and the Soroptimist commitment to a world of peace, gender equality, and human rights, there is no alternative but to push the indigenous rights advocacy and action agenda on the appropriate platforms to create an enabling environment for Indigenous Peoples at the international level. I am not aware if there are any SI projects related to Indigenous Peoples, especially indigenous women and girls, but surely this would be welcomed. As this year’s theme declares, there has to be action for “a new social contract” that is inclusive of Indigenous Peoples.