The “International Day of United Nations Peacekeepers“, May 29, is an international day to pay tribute to all the men and women who have served and continue to serve in United Nations peacekeeping operations for their high level of professionalism, dedication, and courage and to honour the memory of those who have lost their lives in the cause of peace

The theme for this year’s Day is “The road to a lasting peace: Leveraging the power of youth for peace and security.” 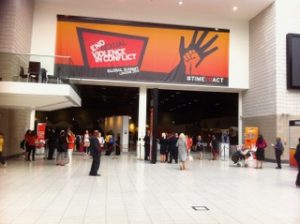 It is well documented that violent conflict disproportionately affects women and girls and intensifies pre-existing gender inequalities and discrimination. Women are also active agents of peace in armed conflict, yet their role as key players and change agents of peace is often not recognised. On the UN Peacekeeping website it highlights that acknowledging and integrating the different understanding, experiences and capabilities of women into all aspects of UN peace operations is essential for the success of UN peacekeeping efforts and sustaining peace.

The first UN peacekeeping mission was established on 29 May 1948 and now tens of thousands of young peacekeepers (between the ages of 18 and 29 years) are deployed around the world and play a major role in helping the missions implement their mandated activities including the protection of civilians.

UN Peacekeeping operations are mandated by the Security Council to implement the Security Council Resolutions on Women, Peace and Security across all peace functions. Security Council Resolution 1325 (2000) was the first resolution that recognised the disproportionate and unique impact of armed conflict on women and girls, acknowledged the contributions women and girls make to conflict prevention, peacekeeping, conflict resolution and peacebuilding and highlighted the importance of their equal and full participation, as active agents in peace and security. The nine subsequent resolutions on Women, Peace and Security (1820, 1888, 1889, 1960, 2106, 2122, 2242, 2467, 2493) have since been adopted, stressing the importance of women’s leadership and meaningful participation in:

The implementation of Women Peace and Security (WPS) priorities is a political commitment in the Secretary General’s Action for Peacekeeping (A4P) initiative which reaffirms that women’s full, equal and meaningful participation in peace processes and political solutions is essential for effective peacekeeping.

With a look to the future, the UN Security Council (2242) has called for doubling the number of women in uniformed components of peace operations by 2028. It is recorded that only 6% of all uniformed military, police and justice and corrections personnel in field missions are women. (https://www.un.org/en/observances/peacekeepers-day/background).

To mark the Day at the UN Headquarters in New York on 27 May, the Secretary-General will lay a wreath in honour of all peacekeepers who have lost their lives while serving under the UN flag over the past seven decades. On this day, how  will you  mark this important event and continue to make a difference to lasting peace and supporting  young people?

The hashtag for the international day is #YOUTHPEACESECURITY so let’s together promote  the official poster as far and wide as we can https://www.un.org/sites/un2.un.org/files/field/image/en_poster_print_4.jpg

Finally, the UK government has been at the forefront of efforts to galvanise support for an international campaign to reduce and prevent conflict-related sexual violence. In 2012, it launched the Preventing Sexual Violence in Conflict Initiative (PSVI), championed by the then Foreign Secretary, Lord Hague, and the Special Envoy to the UN High Commissioner for Refugees, Angelina Jolie. In 2014, as part of the initiative, the UK hosted the high-profile – and first ever – Global Summit to End Sexual Violence in Conflict in London. Clubs were encouraged to find out if their countries had a National Action Plan (NAP) for women peace and security. Did your country have a plan and how has it been developed for the changing needs in 2021? Find out by checking on the internet, ask your MP or government representative, or contact the UN. Please do let me know apdpeace@gmail.com

Come and join us to drive forward gender equality everywhere.