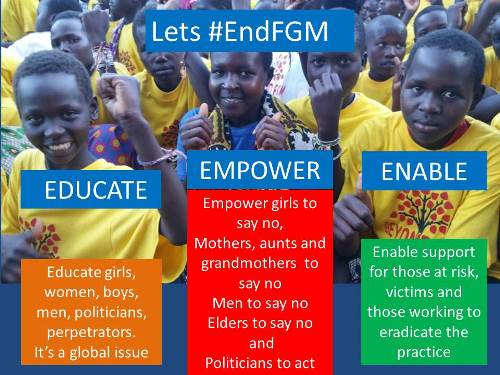 International Day of Zero tolerance for FGM is on 6th Feb and the UN is striving to eradicate the practice by 2030. The rate is falling but 3 million girls worldwide are still at risk annually.

Soroptimists are working in multiple ways to tackle FGM and the words Educate, Empower, Enable are so apt for this mammoth task. Working with other organisations is essential   but our own individual vigilance could save a girl from FGM.

Female genital mutilation (FGM) comprises all procedures that involve altering or injuring the female genitalia for non-medical reasons and is recognized internationally as a violation of the human rights of girls and women. There are several types of FGM according to the WHO:

The physical complications can be fatal and the severe psychological trauma and physical effects last a lifetime.

The use of a razor blade or crude knife and no anaesthetic make it a terrifying event, almost always perpetrated by a local woman (cutter) and organised by female relatives.  In some countries the mutilation may be done by a health professional as a sterile procedure which is safer but is still a violation of girl’s rights, with long term consequences.

It is estimated that at least 200 million girls alive today have been subjected to FGM and it’s still happening because of traditions and beliefs including the idea that it preserves a girl for marriage.  It is done to girls between the first year of life and up until adulthood.  Once a teenager has had FGM child marriage usually follows with the loss of education and the risks of early pregnancy. There is no religious reason for FGM and it occurs in at least 30 countries of which more than 50% have laws against it.

The practice is mainly concentrated in a band from the Atlantic coast to the Horn of Africa, in some countries in the Middle East and Asia as well as among migrants from these areas. FGM is therefore a global concern.

FGM became illegal in the UK in 1985 but the law was strengthened in 2003 and  in Scotland in 2005 to include UK nationals procuring FGM abroad.  Girls are still at risk of being taken abroad for FGM particularly in the school summer holidays, or undergoing FGM within the UK. So far only one prosecution in the UK has been successful (in 2019) and the main focus must be on prevention throughout the world. 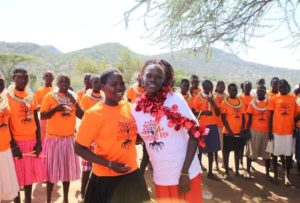 What are Soroptimists doing to tackle FGM?

Many clubs have supported individual charities and Soroptimist projects including the International President’s appeal “The Road to Equality” (2019-2021)  and the Meru project  (2016 – 2019) tackling FGM in Kenya, Nigeria, Sierra Leone, Somalia , Gambia and Tanzania, through direct education and a Global media campaign @GMCEndFGM. Of these countries FGM is illegal in Kenya, Gambia, Tanzania and some Nigerian states but still occurs.

Clubs have been active on social media for the #16DaysofActivism and also signed petitions. It’s very important to use #EndFGM on posts.

SI Lancaster and Grange -over -Sands provide financial and practical help to Cath Holland, a midwife in Cumbria who set up Beyond FGM in Kenya. This charity, working with the Centre for Indigenous Child Rights has a team of Kenyans working in West Pokot who educate not only girls and women, but the village leaders, politicians, traditional birth attendants (many of whom are also cutters) and the local boys about FGM through different courses and for the girls they conclude with an “Alternative Rite of Passage ceremony” with celebrations, dancing and the distribution of bracelets made by Soroptimists. This approach has been most successful in preventing FGM in over 6,000 girls. The current concern is that with schools closed for Covid the girls are at heightened risk of FGM and Child marriage but courses are continuing in Pokot due to the generosity of Lancaster Soroptimists, who answered an appeal in October.

Clubs have been supporting victims and participating in education of their members and members of the public including distribution of information leaflets. There is an excellent Home office leaflet  and the Daughters of Eve website includes useful information and support for victims.