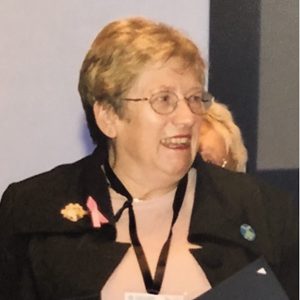 It is with great sadness that I must announce that Anne Ainsworth passed away peacefully yesterday, 10 February 2022.

Anne, a lifelong Soroptimist, was very much admired and respected and will be greatly missed by all who knew her, both as a friend and a colleague.

Anne was born in Norfolk and at the age of 16 joined the Civil Service, following the tradition of both her parents. She joined the Inland Revenue staff in Norwich and by 1973 had become a Tax Inspector.

Anne met her husband, Peter, in 1963, on the back of a scooter, through their mutual love of motor sports.  Motor racing became a passion throughout their lives together and they had several sports and rally cars in subsequent years!

Anne first became a Soroptimist in 1973 when she joined SI Norwich at the invitation of her Mother-in-Law.  Upon moving to Cambridgeshire in 1979, she transferred to SI Cambridge in 1980.

Anne served as President of Cambridge four times and was the club Secretary for many years.

With her accountancy background, Anne was always in demand as a Treasurer, and served her Club, the Region and Federation in this position for several years.

Anne was elected to the role of Federation Treasurer in 1994, which gave her an opportunity to travel widely to conferences in other Federations and she developed a particular love for Africa.

In 2003, Anne was appointed as International Treasurer, a post she much enjoyed, at the same time acting as Treasurer for Federation conferences in Birmingham, Bournemouth, and Durban in South Africa.

Anne said that ‘being a Soroptimist has broadened my horizons and enabled me to meet many Soroptimists from various parts of the world. I’ve been privileged to visit clubs and projects in California, Mozambique, Nigeria, South Africa, Zimbabwe, and the SIAM project in Thailand’.

One of the highlights for Anne as a Soroptimist was being made an Honorary Member of the Federation in 2005, a rare honour.

On behalf of the Federation, I offer our sincere condolences to Anne’s family and many friends at this sad time.