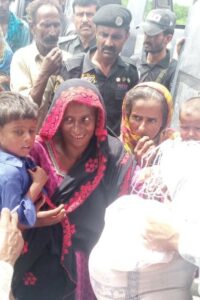 Soroptimist International Great Britain and Ireland (SIGBI) is very saddened and concerned about the devastating floods in Pakistan which have affected the lives of 33,000 people and killed over 1,400. We have sent a donation of £2,000 to one of our Members in Pakistan.

Talat is involved with Connect, a not-for-profit organisation working in Pakistan, who are helping people affected by the floods. Talat has written a blog for them to describe her personal endeavours to help provide relief to villagers. Read her blog below:

“I was in Belgrade when news of the devastation caused by floods started reaching us. Connect decided to reach out to the 6 small villages adopted by us as they were in a dire state The villages were later evacuated as the breach at Kot Alam inundated their houses.

There is some solace in knowing that they must have taken the food supplies distributed by us with them which would have sustained them for at least a week or 10 days.

I was then approached by Shehla Talpur, who lives in Naunkot Thar about the condition of the people who have been displaced in that area. Many had found temporary shelter in Jhuddo but were having great difficulty due to lack of food supplies. It was a matter of survival. Most had lost all their belongings. Some had rescued their cattle and were surviving on cow or goat milk.

Connect was able to mobilize funds from friends and supporters quickly.

Soroptimist International of Great Britain and Ireland also collaborated with Connect to help us in this hour of dire need.

Jhuddo is about a 5-hour journey from Karachi but due to road conditions from Mirpurkhas onwards, I was expecting to reach it in about 6 or 7 hours.

We decided to leave at 4 am in the morning, a daunting experience in crime infested Karachi, so that we would have the next whole day for distribution.

I picked up Shehla Talpur from her house and we were on our way.

The truck with food packages had already left Karachi at 3 am – but as we were in a fast moving car, we soon crossed them because due to all the weight of food packages it was moving quite slowly.

There was a forecast for rain in the Interior of Sindh so I made sure that the truck was like a container – that would keep the food supplies safe from weather conditions and also from roadside loot and plunder which is rampant as people are hungry and desperate.

I had arranged security for our Truck from Mirpurkhas onwards, but at Hyderabad Toll plaza, our Truck was stopped for 2 hours on the pretext that they will allow 10 trucks to leave together in a convoy to avoid looting. This was lame as all trucks with food supplies were not going to the same place – some to Larkana, some to Dadu, and some to Juhi…my frantic phone calls to the Army Personnel at Hyderabad finally did the trick. Our truck was released but we had already lost 2 precious hours!

After Mirpurkhas, due to the security arrangements I had organized, police mobiles escorted our Truck right up until Jhudo and everything remained safe.

From Mirpurkhas onwards, there was flood water everywhere – thousands of people have made makeshift homes on either side of the road. Some had found tents, some sat under bedsheets, some under the sky.

Women tried to gather some sticks to light fires and cook something on the road, that being the only dry area, as otherwise it was flood water everywhere.

Children, exhausted, slept under the scorching sun. In the evening going back I saw swarms of mosquitoes buzzing all around them. Dengue and malaria fever (due to mosquitoes) is rampant. If people are not dying of hunger and water-borne diseases then due to Malaria and Dengue. As a matter of fact, many social workers working in these areas have died due to Dengue recently. My family was very anxious about this – I had, however, applied all sorts of concoctions and mosquito repellents on myself.

Displaced people have this air of resignation – just accepting their fate and coping with the difficulties one step at a time. Every minute is a new challenge, every new day can be full of tragedy for them! The resilience of these people and their patience is being tested every minute, every day!

These shanties stretched for miles on either side of the road, hence we moved at a very slow speed at some areas. The hunger and desperation is such that there were reports of loot and plunder of many trucks taking food supplies. Hence, for me, that was a worry too.

Due to the forecast of heavy rain in Jhuddo, I had asked that the distribution be done inside a building under a roof and heads of 550 households be called inside the building to take the food packages one by one. 50 packages were sent to people who are still marooned as they had not left their homes and didn’t want to take their young daughters to the road shelter – less harm under an open sky.

At the college the Army had set up people in classrooms. Women from 6 or 7 households together in one room. Men in the other wing in the same way. There were at least 30-40 rooms all occupied.

People had queued up already waiting for us inside. We locked up the gate so that more people don’t gather outside and the crowd doesn’t get unruly.

Meanwhile Shehla had done her homework efficiently. She had lists of the names heading each household. Everyone was waiting but our truck took at least 4 hours to reach Jhuddo from Hyderabad.

It was very hot and the wait seemed never ending.

Finally the truck arrived and our volunteers unloaded the stuff and distribution started in an organized manner.

Once the distribution finished we decided to leave quickly as we had a long journey back- which would be mostly in the dark. Traveling in darkness on roads in Sindh is a very dangerous endeavor but there was no other option.

We did stop at Hyderabad to have a cup of tea and to use the toilet  since no roadside toilets were available from Mirpurkhas to Jhuddo – every thing was under water.

We reached Karachi by 2 am.

It was a long and difficult journey- physically, emotionally and mentally! Totally exhausting! Not easy to see utter helplessness all around you – knowing your total effort is just a drop in the ocean!

But the support and care that was shown by friends from all over the world, from my sisters in SIGBI, members of Connect, fellow Pakistanis who had heard about my work, was highly encouraging. All came together to help these people living in remote villages of Sindh – surrounded by water, misery and hunger!

Most of these friends probably couldn’t imagine the level of poverty, helplessness or squalor in which millions are living in Sindh – but they helped and supported us. I also felt good that I had done my bit by making it possible for them to get a glimpse into the lives of these displaced people – and through Connect and SIGBI I had managed to bring some relief to the hundreds of families in Jhuddo, in the form of food supplies. For them it is a matter of survival first and foremost!”

Note from our Programme Director:

Congratulations to Talat on achieving so much so quickly. A true demonstration of what we can do to help others. Those wishing to donate to help people in Pakistan can do so through official appeals such as the Disasters Emergency Committee in the UK and through bodies such as the International Federation of Red Cross and Red Crescent or the UNHCR, the UN Refugee Agency, for example. The window for donating to Talat is not available at present.