Abdul, the Afghan vegetable vendor, was a young man barely out of his teens. Seeing me as a regular customer at his stall on a street corner in East London, he smilingly befriended me and checked on my daily welfare. I reciprocated by warming up to him. His infectious boyish enthusiasm led me to indulge in small talk with him regarding the weather, the daily business, and other things. He liked cricket and hoped to join an English team. School? Could not finish, he grimaced. Once when I asked where his parents were, he suddenly fell silent and looked away. His face turned cloudy as he choked: “Don’t ask me, I shall start to cry.” And then the true impact of his misery struck me. Abdul was a refugee and had lost his family, friends, and home to a war in faraway Afghanistan.

Historically people have been compelled to leave their homeland due to reasons of poverty, violence, or fury of nature. Today, according to UN, 250 million people worldwide live away from their place of birth. Such people start their lives afresh in a new land, in an unfamiliar environment, often using a new language. Sadly, in all such journeys and relocations, women, children, and the disabled are the most vulnerable.

Soroptimist International UN Representatives with members of other civil bodies took up their case and worked tirelessly for two years to the UN put together the Global Compact for Safe, Orderly and Regular Migration (GCM) in 2018. GCM is the first comprehensive, inter-governmentally negotiated global document on migration within which countries must work to make the migration experience tolerable. Also, 11 out of the 17 Sustainable Development Goals (SDGs) also contain targets and indicators relevant to migration.

The UN classifies migration by its three causes: namely economic, political, and environmental.

In other words, Willing Migrants are those who migrate for economic reasons, and can always return home without fear.

In contrast, Forced Migrants are compelled to leave their home country, looking for safety and security, due to political violence back home. Today, more than 8 million refugees have been forced to migrate from Ukraine, looking for temporary homes in Europe.

Closer to home, 40,000 Rohingyas have sought shelter in India. The UN has registered them as “Forcibly Displaced Myanmar Nationals,” and are the world’s largest stateless population, with more than 0.9 million camping in neighbouring Bangladesh. 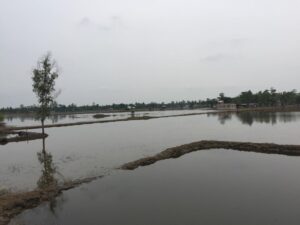 Lastly, there are the Climate Migrants, who leave home because of environmental stress and disunities. This is a global threat, which needs to be addressed with equal attention. The coastal lowlands of the Sundarbans, some 150 kms south of Kolkata is one of the most affected areas. 60% of Bengal’s 534km coastline is under erosion, exposing it further to the ravages of climate changes, flooding, and imbalance of regional biodiversity. Since 1980, land subsidence, sea-level-rise and frequently occurring heavy cyclones have repeatedly devastated local infrastructure with saline water flooding the fields and making crop cultivation impossible. Peasants who live off land, are losing their livelihood, with hundreds leaving home permanently. Witnessing the hapless people of the Sundarbans trekking their way out of the inundated land with their meagre belongings to an unknown future is distressingly sad. It is estimated, the number of climate migrants will rise to 45 million in 2050.

Sensing that we have to act quickly, Soroptimist International is making every effort to stymie and reverse environmental degradation. As part of the centenary celebrations, SI clubs were encouraged to plant trees. The two city clubs rallied actively to find places on the SIGBI Tree Planting Map. SI Kolkata (Calcutta) planted 100 trees within the city premises. Sufficient protection to the saplings was given until they took roots. SI Kolkata (Calcutta) also enthusiastically supported SI South Kolkata in their big project of coastal reforestation of the degenerated mangroves. Mangrove forests act as absorbers of impact of cyclonic winds and protect the coast from eroding. Afforesting the Bengal coastline will be effective in preventing further catastrophe. Soroptimist International is on the right track and will increase activity, to do more to thwart this disaster.