President Cherril Blair had a busy year, particularly at the start, having agreed to step into the President’s role at the last moment.  Our annual dinner was held in the Ramada in Portrush and the summer outing saw a return to school, with a visit to the Causeway school taking some members back and reminding others of the stories their parents or grandparents told of school days.

During the year there were talks from the Royal Society for the Protection of Birds, a practice nurse on women’s health issues, a volunteer for Habitat for Humanity and the custodian of Glenarm Castle. We learned about environmental and health issues as well as international aid work.

At Christmas, as an alternative to gifts for the Women’s Aid refuge, the Club paid for basic equipment and ingredients which were used to teach some basic cooking skills to those passing through the refuge who would benefit.

The Club hosted the local public speaking competition which was well supported by local schools despite a clash of dates with some drama productions.

The Charity Fork Supper raised funds for the neonatal baby unit at Antrim hospital and Action Cancer. Project Sierra also benefitted. During the event awareness of fair trade was promoted by having a raffle of fair trade hampers and having a fair trade stall.

We also made a donation to the palliative care fund of the Robinson Memorial Hospital.

Our Club along with SI Coleraine, responded to a request from the local Rotary Club to support the purchase of tandem cycles. These tandems will allow the Causeway Wheeler Cycling Club to work in association with the local blind centre and provide the opportunity for visually impaired to go out cycling, on the rear tandem seat of course! 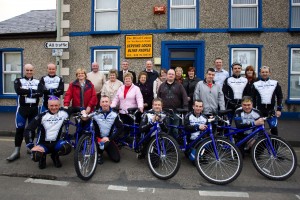