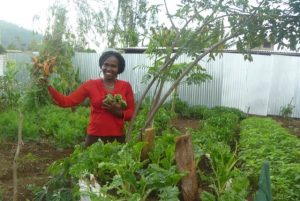 With a population of 136,000, the Meru District is inTigania East. 90% of the population live in rural areas, with HIV/AIDs prevalent in the region. Entirely focused on providing opportunities to women and girls who may never otherwise be given the chance to earn an income, the Project seeks to give them status within their community, and fully embraces the three key areas at the heart of SIGBI’s Programme Focus Goals – Educate, Empower and Enable. Improved food production and education will support women and girls to transform their own lives and the lives of others, through a process of cascade learning and mentoring, inevitably reducing poverty, improving health and increasing rates of employment.

As a club we have had several functions to raise awareness and money for this project. We started last summer, with a stall at Wenvoe Garden Centre to raise awareness about the Meru Garden Women’s Project. We were able to sell jam imported from the Meru region in Kenya, had our very colourful boards on display and gave out leaflets.

In October, a “bring a plate” dinner party organised by Group A  raised £70.00 which was added to the contribution of the Wales South Region.
A tombola and book stall was held in July at Rotary’s Duck Race at Barry Knap raising another £85.00.
Back to top