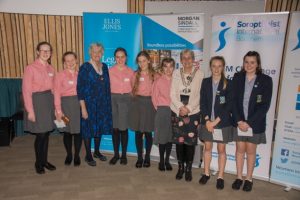 The STEM Challenge is now in its seventh year attracting more interest from the engineering world than previously. The challenge is for girls in order to promote participation and raise aspirations in industries that young women often see as masculine and not for them.

This year the prizes were presented to the winners by HM Deputy Lord Lieutenant of Dorset, Professor Gillian Slater. She thanked the girls and told them that she was “very impressed by their enthusiasm and how they answered questions.” Professor Slater is aware of the gender imbalance in STEM careers and shared a memory of when she won a top prize in Maths and the newspaper headline read ‘Woman gets top Maths prize’; Prof Slater told the girls that she hopes that if they win a top prize in Maths the headlines will read ‘Maths genius wins prize’

Year 8 ‘Po-Tential’ were the Winners from Knighton House School focussing on Nepal and the need for cooking all ingredients using one source of heat; this was to reduce the need for deforestation when using wood as a fuel.

Year 8 ‘FEAJ’ were the Runners Up from St Peters School and focussed on providing electricity for people living in favelas in Brazil by using a drain pipe made from recycled water bottles which made electricity generators attached to rechargeable batteries. The electricity produced will create positive effects on children’s ability to study as well as improve the whole family’s standard of living.

Year 9 ‘LEW’ were the winners from St Peters School and produced a sustainable, eco-friendly sanitary pad to help end period poverty in India which will help increase hygiene rates, the number of girls still attending school and awareness of the menstrual cycle.

Year 9 ‘Eco-Foodies’ were Runners Up from Bryanston School and focussed on a system for growing food in a water conserving greenhouse by utilizing evaporation and photosynthesis. The greenhouse is transportable, easy to construct and will boost access to small-scale food production for small communities and families in Zambia.

The Challenge was taken up by 19 teams of girls in Years 8 and 9 from 12 schools. They were required to design, build and cost a project to help people in the poorest parts of the world. The end product had to be sustainable, fit for purpose and cost effective in a world where 884 million people lack access to clean water, 840,000 people die each year from water, sanitation and hygiene related causes and every 20 seconds a child dies from a water related illness.  The projects focused on areas such as the provision of clean water, shelter, improved sanitation, safer food, improved health, solar power and recycling.

All participants achieved either the Bronze or Silver British Science CREST award which recognizes achievement in STEM based subjects and were sponsored by local companies Morgan Sindall Construction South and Ellis Jones Solicitors.

The judging and awards ceremony was hosted by Bournemouth University in the much acclaimed Fusion building, who also provided refreshments for the girls and their supporters. Students from the University acted as STEM ambassadors and gave a guided tour of the University to girls and parents.

Other speakers at the event included Esther Gordon-Smith, Chartered Civil Engineer at Highways England, who gave a very inspirational speech to the audience but particularly the girls. She emphasized the definitions of an engineer by linking it to society’s needs and the challenges in the future. Ann Garvie, President of Soroptimist International 2013-15 and working in the construction industry, praised the girls and explained, “knowledge is knowing a tomato is a fruit, wisdom is knowing not to put it into a fruit salad! You’ve shown that you know the difference in your projects.” Dr Margaret Emsley, Civil & Constructional Engineer and a Past President of Soroptimist International Great Britain & Ireland, sent encouraging postcards to each entrant which demonstrated facts about the importance of engineers.

In her concluding speech Liz Dominey, Joint President SI Bournemouth, thanked the girls for making it possible for a recent invitation to present the STEM Challenge at an event entitled ‘Lifting Women Out Of Poverty Through Lifelong Learning’ at the UN’s Commission on the Status of Women (CSW63) in New York. She emphasized that if it wasn’t for the girls taking up the STEM Challenge then the invitation would not have been forthcoming.  The objective of the event was to demonstrate that quality education for women and girls throughout their lifespan is a necessary foundation if all Sustainable Development Goals are to be achieved.

Bournemouth Soroptimists hope that more girls will consider studying STEM subjects at GCSE, and ‘A’ level and go on to take a STEM based apprenticeship or study at University for a STEM based career because of the fun and interest raised by this Challenge.

SI Bournemouth members excelled themselves in their teamwork, liaising with teachers and Bournemouth University ensuring that the event ran smoothly and maximizing publicity for all stakeholders.