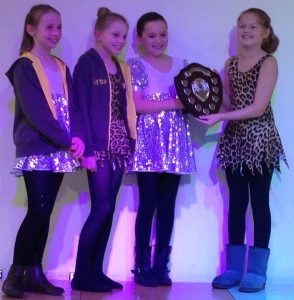 2015 Brownies Got Talent – Bridgend and Porthcawl

In the last 2 months Brownies across Bridgend and Porthcawl have taken part in heats for the competition at unit, district and division level. 98 girls from 6 Brownie groups took part and had a lot of fun along the way.

Each of the girls performed in front of an audience, with acts as diverse as singing and dancing, playing an instrument, hoola hooping, doing magic, dog obedience and even whistling.

11 girls in 8 acts took part in the Grand Final, in front of an audience of around 100 people and competed for the grand trophy.

This is the second time the competition has been organised. Sponsored by SI Bridgend, it aims to encourage girls between 7 and 10 years of age to ‘have a go’, to demonstrate and develop their talent and to build confidence.

The winners of the Gran Final were Jesse, Chloe, Reese and Lowri from Pen-y-fai Brownies with a gymnastic dance.

Well done to everyone who participated, you all stepped up to the mark!