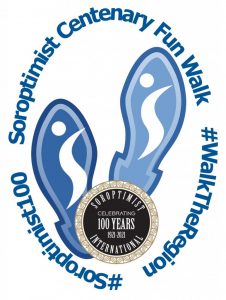 Never was there a truer phrase when it came to the Regional event which was the Centenary Walk #WalktheRegion.

It was agreed that this walk would be a lead-in to our celebration of Federation Conference 2021 and to signify that a baton would be passed by Region President Louise Parry, from English to Welsh Clubs on Saturday 11th September and then on Sunday 12th September to the Conference Chair, Anne Macdonald

There was a symbolic baton handover by President Louise from English to Welsh Clubs at Wepre Park on Saturday 11 September. On Sunday 12 September at the Llandudno Bandstand President Louise handed the baton on to Anne MacDonald whilst the Mayor joined in welcoming Soroptimists.

The three parts of the Region, Cheshire North Wales and Wirral all had their own organisers who worked both as members of the organising committee and with Clubs. The only givens were the date (11/12 September), the end point and the fact that it was a fun walk which was inclusive in order to encourage all members regardless of their ability to take part

After the handover people then went to a local hall where SI Llandudno had laid on refreshments which was very much appreciated by all.

The Regional Centenary Walk was over 90 walkers covered 516.75 miles. It was a weekend of smiles and fun, of making new friends and catching up with old friends the pandemic has prevented us from meeting over the past 18 months or more.   A member of one of the North Wales Clubs said to me today “it brought members together again which was much needed”.

It truly was a Regional event as there were walkers from every single club in the Region and is the first time the Region had been able to get together since the start of lockdown in 2020.