The club has 15 members and meets monthly at Mollington Banastre Hotel, 7.15pm for 7.30pm.

I wish to thank you all for allowing me to take up this challenge of SI Chester President. I am in awe of you all, seeing you as a group of women who are strong and inspiring. You have empowered me with simple words and actions, quiet understanding and support, that gives me strength to take on this role.

When my daughter started rowing I encouraged her although she couldn’t swim very well, but I said ‘have a go’. Now it feels like it’s my turn to paddle our boat down a river with guidance from IPP Carole having gone ahead and President Elect Jane supporting following behind. It may prove challenging, fun and even scary but I hope to gain experience and with your wise words and practical help keep Chester SI on a successful path.

As we head into our fifth year let us take on new challenges, as in the International Presidents Appeal which starts this month ‘The Road to Equality’, new regional projects and supporting Smart Works as a club. My plan is to work with this inspiring team and do our best for those women we identify in greater need.

May our friendship be the basis of shaping and improving our club over the next year.

The first Soroptimist Club in Chester was set up during the war years when a group of interested women met in February 1940 at the Grosvenor Hotel.  These women were supported by members of the North Wirral Club (known today as SI Birkenhead) and when the club was eventually chartered in November of that year the North Wirral Club was their Mother Club.  Chester was a grand-daughter of the Liverpool Club (listed 19th in the first 50 clubs in the world) and was the 13th club formed in the N. W. Divisional Union (DU), as our Regions were then known.

There were sixteen Founder Members with categories ranging from Ladies Outfitter to Pig Breeder, as well as several from the medical and teaching professions.

The Charter Luncheon was originally planned to be held at the Blossoms Hotel and the cost of the 3 course meal plus coffee was 3s 6d per head with a gratuity of 3d!  This function had to be cancelled because a number of the main guests could not attend and it was eventually held on the 2nd November 1940 in the Town Hall Council Chamber.  Over 90 people attended.  The President was a Mrs NIR Clarke, the DU President was Miss E. Glen Dobie, from the North Wirral Club, and the Federation President was Mrs HD Williams.  Guests included the Mayor and Mayoress and Bishop of Chester.

In 1947 the club acquired a badge.  This was designed by one of the Founder Members, a Miss Iva Williams, who was an artist.  It was made of silver and enamel and hallmarked by the Chester Assay Office, which closed in 1962.  The badge has, as part of its design, 3 wheatsheafs (being the ancient symbol of Cheshire) on a shield.  Above the shield is the emblem of Soroptimist International (SI).  The shield is supported by a garland of oak leaves joined at the base by 2 acorns and a stag (these representing the nearby Forest of Delemere).  The original badge was on a ribbon and the names of the club members were engraved on small plates and attached to the ribbon.  In the early 1990s the ribbon was replaced by a beautiful silver chain and after that the names of the Club Presidents were engraved on the links of the chain. A wooden box was made by the husband of a member and the small name plates from the ribbon were placed in this box and kept with the club memorabilia.  When the club closed in 2000 the chain and badge were deposited with the Grosvenor Museum in Chester.  We were delighted when, after a lengthy search, these items were found and given back to the club with the original block and gavel which was presented by the North Wirral Club and used at the first Charter Luncheon.  We also have the original Visitor’s Book and other memorabilia which will be on display at the Charter Ceremony of the new club on 21st February 2015.

The Chester Club flourished and meetings were held initially at the Blossoms Hotel.  The club later moved to Stanley Palace in Watergate Street, then back to the Blossoms Hotel and latterly met at the Plantation Hotel, Liverpool Road.

In 1948 Chester was successful in helping to set up a new club in Bangor.  They presented their daughter club with a gavel and block and on the occasion of their 21st Birthday gave them a silver salver at their celebration luncheon.

During the years links were formed with 3 sister clubs overseas – what today would be called Friendship Link Clubs.  They were in Banning (California), Chester (Pennsylvania) and Upsala in Sweden.

The club supported charities and causes too numerous to describe here.  One topic which should however receive mention was that of housing for single women and for the elderly, a topic high on their agenda. In the 1950s the club raised funds, their aim being to buy a house to provide living accommodation for retired persons and also a room for club meetings.  Eventually the Chester Club joined forces with the Abbeyfield Society and purchased a site for a house to accommodate 8 people.  This house, on Christleton Road, is still in use today and the new club have recently continued the relationship with the Abbeyfield Society and made a small donation to them.

The club enjoyed social occasions too and celebrated the Silver Jubilee of the Soroptimist movement with a dinner at the Queen Hotel in 1948.  A number of club dinners were held to celebrate the anniversary of the Club Charter, at least one such dinner having been held at Rowton Hall Hotel in 1984. (There may have been others, but we do have the programme/menu for this particular one).

On 22nd April 1990, as part of its Golden Jubilee year, the club held a Church Service and Insignia Luncheon at the Chester College Complex (this event being attended by one member of the new Chester Club!) and on 24th November 1990 a Golden Jubilee Dinner was held at the International Hotel. This was attended by the Federation President, Mrs Jane Barrie.

Sadly, in 2000, during its 60th year, the Soroptimist Club of Chester was dissolved.  However 12 years later, thanks to the vision of some of the Cheshire, North Wales & Wirral Regional Officers, and the enthusiasm of two Soroptimists living in Chester, a group of enthusiastic and vivacious women have seen the Chester club re-open. 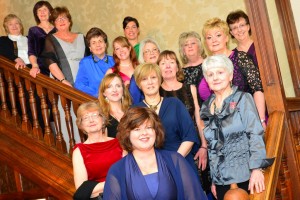 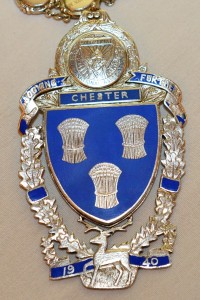 Saturday 21st February 2015 was a red – letter day for members of SI Chester.  The Club finally received its Charter at a glittering ceremony held at Rowton Hall Hotel just outside Chester. The revival of the Chester Club had begun two years previously with a small membership of a few determined and highly motivated women. The number of members grew and by September 2014  the quorum had been reached and the 17 Founder members of the club, along with their President Victoria Pritchard, awaited the Charter ceremony with anticipation and excitement.

Over 120 guests attended the event including Federation President Jenny Vince, Federation IPP Margaret Oldroyd, Federation Directors, Regional Officers, Club Presidents and members and the Sheriff of Chester Councillor Herbert Manley and his Lady. It was a particularly proud moment for the founder members and new President Victoria, wearing for the first time the beautiful silver chain and original badge that belonged to the former Chester Club, as she received the Charter from President Jenny.  The new club members were then warmly received into the Federation with much clapping and cheering. After dinner and speeches a skilled magician provided an unexpected twist to the entertainment and later guests danced the night away to a disco.

The evening also provided an opportunity for the Club to launch one of its first programme action projects for the coming year – making Chester a Toilet-Twinned City – to fund the building of proper latrines and improve hygiene for thousands in developing countries. New President Victoria duly presented the Sheriff of Chester with a plaque of a toilet twinned with his own to hang in a suitable place!