Our congratulations must go to our Fund raising coordinator Anne Croft and her team for the following:
Our Charity event in the Corn Hall (13th November) very successful £444 to be added to other monies to be distributed to local Charities Christmas. The knitted Christmas Puddings and Father Christmas hats, raising at to fit a Ferraro chocolate, proved to be very successful. We held a Christmas Stall in the Parish Church on Saturday 9th December to raise funds for our Friendship Weekend 2018. We would like thank everyone who gave items to sell or knitted the very popular Christmas Puddings and Father Christmas Hats. At this point we have to thank and make a very special mention of member Jennie Beadle who knitted over 800! Amazing achievement.
On Saturday 16th December a successful and enjoyable Mulled wine and Coffee morning was held at the home of one of our members, in aid of CHYP raised the fantastic sum of £540!
Watch out for announcements in February/March when we will be holding an event will be held in support of ‘Water Aid’.

November 2017
It had been agreed, as one of the results of the Club’s research last year, that contact would be made with Gloucestershire Young Carers to discuss areas where support was needed and members could potentially help. Project lead Kathy and Club member Joanna initially visited the Young Carer’s Head office in Twigworth. Gloucestershire Young Carers (http://www.glosyoungcarers.org.uk). The staff were very enthusiastic and welcomed the Club’s offer to help in specific areas that will be of benefit in raising opportunities for young girls especially. The average age of a young Carer in Gloucestershire is 12yrs. Subsequently a number of members attended a very informative meeting with Jane from Young Carers. They were taken through a Power Point Presentation that informed them about stark details pertaining to Young Carers.

It was agreed that the first area help was needed was to visit GP Surgeries in the Cotswolds to see how much information and support was available, through GPs, for Young Carers. Are there referrals from GPs to ‘Gloucestershire Young Carers’ provide support for Young Carers? How many GPs are aware of children accompanying an adult to the surgery are actually young carers and what needs they themselves may have? Post meeting the Club were advised that, inn the year 01/10/2016 to 30/09/2017, there was only one referral by a GP surgery in Gloucestershire! There are 16 surgeries in the Cotswolds which need visiting and Club members are volunteering to undertake these visits.
Each volunteer member is to be provided with introductory letter from Young Carers to take to Surgeries and they will also complete the Volunteer form and the Data Protection forms are being finalised. It is anticipated that this Project will be launched at the January Business meeting
In addition, the operational key worker for the Cirencester area is also looking forward to discussing the possibility of some Soroptimists mentoring teenage girls who need empowering support. A Trustee from Gloucestershire Young
Carers and also an NHS lead who are both interested in the proposed Project will be introduced to the Soroptimists.

If anyone is interested in learning more about this Project, including Members of other Soroptimist Clubs, please contact, in the first place, Publicity Chairman, Barbara Banks in confidence: Barbara@banks31.myzen.co.uk 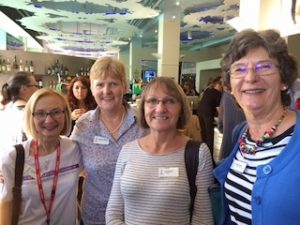 President Barbara and attended the conference in Poole on Thursday on the subject of
Modern Slavery and Human Trafficking.
There were 1300 attendees. It was extremely interesting and thought provoking.
One of the  organisations supporting the event was SI Poole and a member
is seen here on the left with a member of SI Stafford next to me.

Quiz Night in Aid of WaterAid
Members of Cirencester Soroptimists held a Quiz Evening for WaterAid in South Cerney recently when together with a raffle, auction and donations a total of over £1660 was raised. Photo shows the winning Quiz team ‘The Telegraph Readers’.