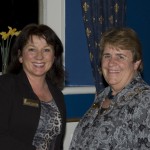 Members of SI Cirencester & District installed the president for 2012 – 2013 at its Annual General Meeting on 4th April at the Royal Agricultural College.  Sue Dennis was given the chain of office by the retiring president, Anne Brooker, who chaired the meeting. The club’s new president-elect is now Marietta Crockford, and the new vice-president is Margaret Headen.   The Immediate Past President, Anne Brooker, 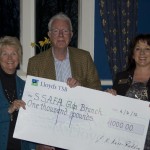 was warmly congratulated for her leadership of the club over the past eighteen months.The new president Sue Dennis faces a busy year ahead as the club will host the South West & Channel Islands Regional A.G.M. in September and is also arranging the performance of the Caldicot Male Voice Choir for the town in the same month.A wide-ranging review in the annual reports of the club’s activities 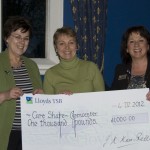 in an eventful year was appreciated by members, and cheques were presented to the club’s two charities during the year, SSAFA (the Soldiers, Sailors, Airmen and Families Association) and Care Share.   All those who had contributed to the club’s success were thanked by Anne Brooker.