(As spoken by President Sue at March’s meeting) 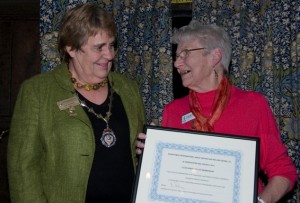 A little while ago Jo Newbould wrote a personal letter to me advising me that she was retiring from the Club partly for reasons related to her health and because she said that she felt that she no longer played a full part.  I am afraid that I had to disabuse her on the last point from the Club’s perspective.

I first met Jo soon after she and Palmer moved over from Northern Ireland. They rented a property for a short while, just round the corner from where I live.  I just happened to be Joint President at the time and was informed by SIGBI of this member who wanted to transfer into our Club. I naturally popped round, accepted a glass of wine and the rest is history, as they say.
Jo first joined Soroptimist International as a member of SI Coleraine in 1980 transferring to SI Cirencester in 1999. In Coleraine she served a Secretary and Press and Publicity Officer. In our Club she served as President in 2001- 2002 and Club Regional Representative from 2001-2003 as well as being our Number 63 link for many years.
Jo is probably thinking that there is nothing remarkable about her service to Soroptimists. No, she never went for Regional positions, or beyond, but Jo has shown us what it is to be a good and loyal on the ground Club member.  She has always had a wealth of knowledge, and is one of our Corporate Memories in respect of  Programme Action and the basis of Soroptimism. She has always understood how to approach sometimes difficult and sensitive situations and has been a great support in everything the Club has tried to achieve.
Jo, you are an extremely valued and respected member of this Club and, as I have already said to you, I personally would like to thank you for all the support you have given me over the years since that memorable glass of wine when you were renting around the corner!!
The Executive unamiously agreed that in recognition of all your support to Soroptimist International we would like to make you an Honorary Member of this Club.  Please accept this Certificate in recognition of this.
Sue Dennis
President of SI Cirencester and District
March 2013