Cirencester and District Soroptimist presented a cheque for £1000 to Sandy Price, the Chairman of Cirencester Housing for Young People (CHYP), at its September dinner meeting.  The money was raised by the club at a “Pudding Garden Party – A summer evening of puddings & drinks” in June at the home of Anne and David Croft in South Cerney.  CHYP has been chosen by  President Marietta Crockford as one of her charities this year.
Puddings of all kinds were donated by club members and guests enjoyed sampling as many as possible. The evening included the auction by David Croft of an original painting donated by local botanical artist Joan Lyons, and together with a raffle and ticket sales, the evening raised a total of over £1000 for CHYP.  Anne Croft later revealed that she has obtained matched funding of £500 from Barclay’s Bank in Cirencester, to be added to the proceeds.  The club is grateful to the bank for its generous support. 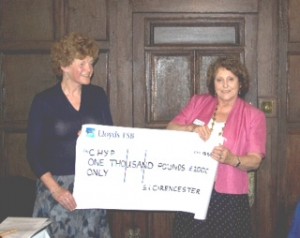 Sandy Price spoke to club members about the current work of this local Cirencester charity. Despite CHYP’s work in the town since 1986, the need still remains to give vulnerable young people safe and supportive accommodation when they are left homeless.  She invited Soroptimists and friends to their next fund-raising event, a wind octet concert at the Corinium Museum on 1st November.