The winner of the Learning Opportunities award is SI Cirencester and District for the Literacy Competition.

SI Cirencester and District formulated the Literacy Competition, now in its 6th year. 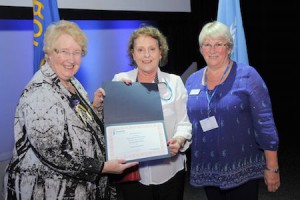 S I Cirencester achieved a major triumph when the Literacy Competition it organises was named the overall winner of the Learning Opportunities award, at the Soroptimist International of Great Britain & Ireland annual Federation conference,  held recently in Glasgow.

The Literacy Competition, which has been running for six years, is open to primary schools in the Cirencester area with a growing number of pupil entries each year so that most recently it exceeded a thousand. The Competition is intended to encourage creativity and use of language in children and meets one of the Soroptimists’ principal objectives, to promote education. Pat Wright, President elect of the Cirencester Branch said, “It is a great honour and a magnificent achievement to secure this Award for the first time in our history. The local primary schools taking part confirm that the Competition encourages children to write and use their imaginations.”

The Project Leader, Margaret Munroe, and fellow Soroptimist Marietta Crockford, agreed that they were delighted with the Award, but added that “We are even more excited by the successes we have had in encouraging children to discover the wonder of language.”

Teachers, parents, carers and the school governing bodies have all remarked on the success of the project, which has gone from strength to strength and raised the profile of Soroptimism locally and associated the name with Education. 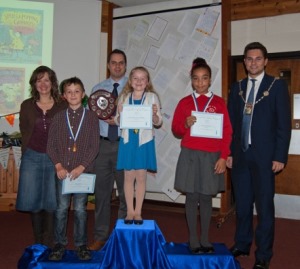 The Awards Evening for the 2015 Literacy Competition was held recently at the Royal Agricultural University in the presence of the Mayor of Cirencester, Cllr Mark Harris. A total of 42 children received awards, and shields for the winners in each category went to:-

It is hoped that even more schools will take part in 2016.

(Also nominated in this category were SI Fishguard and SI Dunfermline.)