Gift Box: things are not always what they seem………… 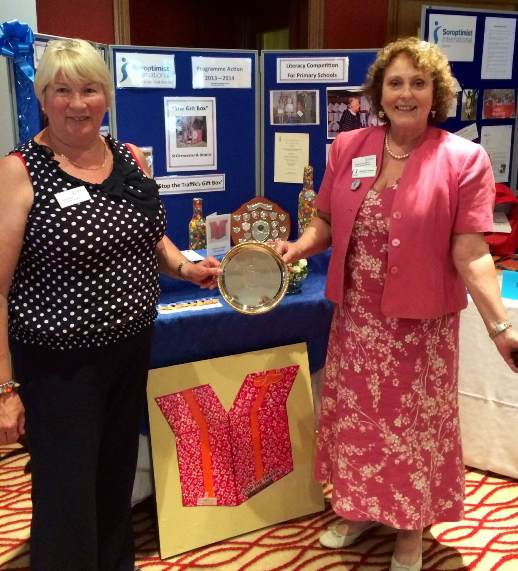 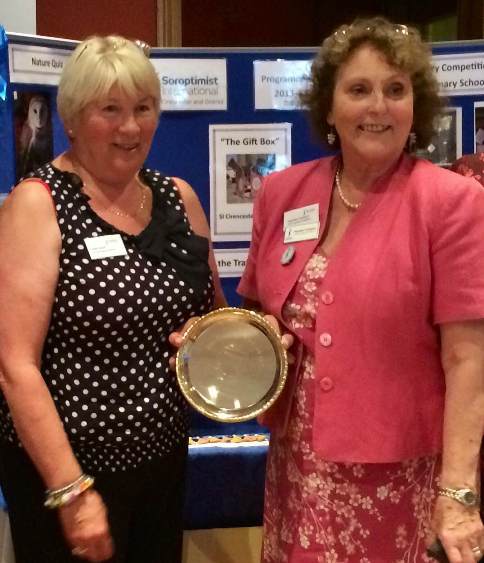 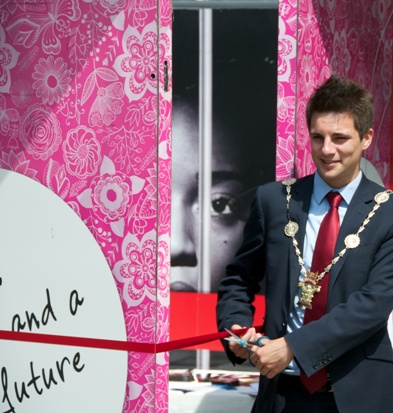 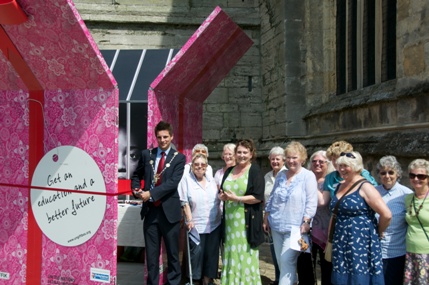 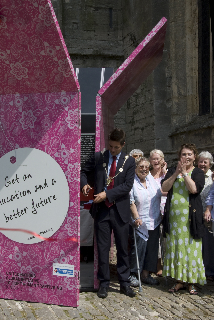 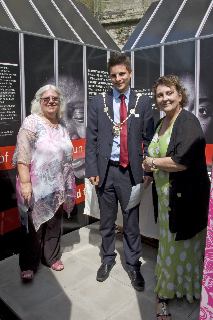 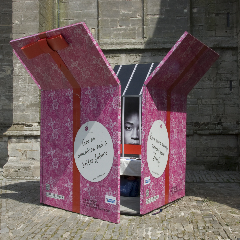 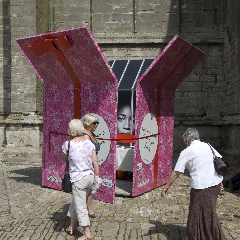 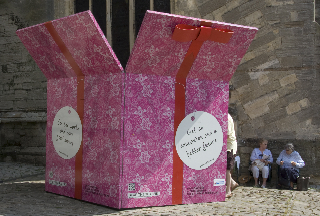 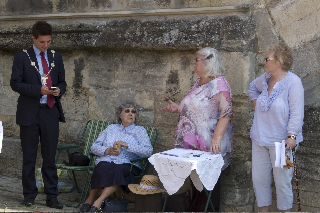 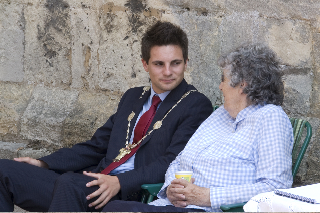 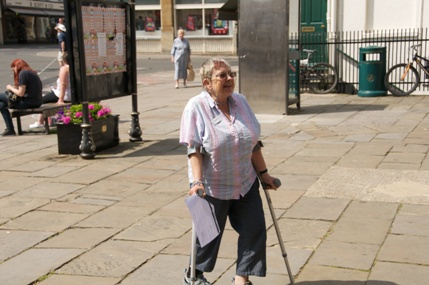 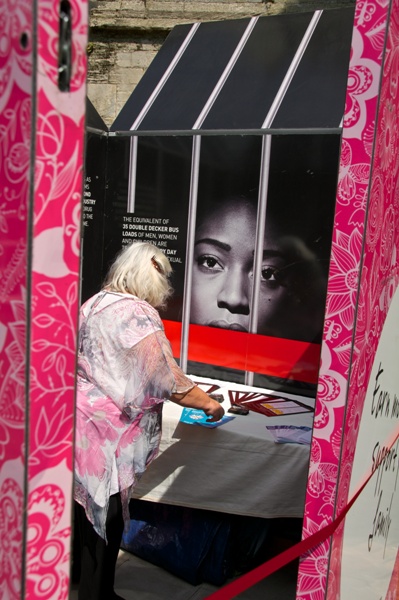 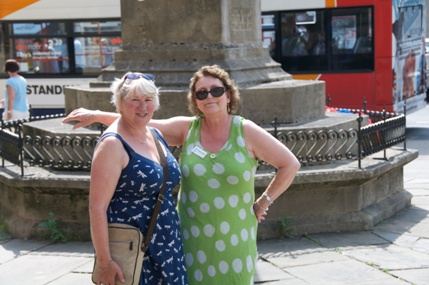 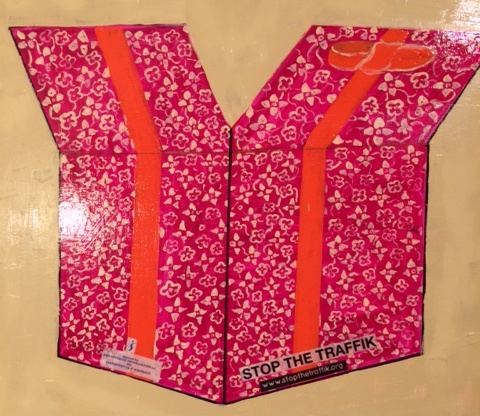 SI Cirencester & District club hosted a ‘ Gift Box ‘ in the Market Place from the 15th to the 29th of July.

WHY DID WE HOST A BOX?

These gift boxes were around London during the Olympics, a unique project launched by Stop the Traffik and the United Nations Initiative, to fight against human trafficking.

They are around seven foot square and from the outside look very appealing with bright colours and a ribbon to draw people’s attention to what looks like an exciting piece of art work.

However the reality is very different. When you step inside it has stories around the walls of examples of human trafficking. After drugs, Human Trafficking is the largest crime and it is known that around the amount to fill thirty-five double decker buses of people are trafficked every day.

WHAT WERE THE LOGISTICS?

Having decided to go ahead with the project our first hurdle was to get permission to site it somewhere in the town, in a prominent position to maximize impact.

Beside the church in the Market Place  was an ideal piece of land in an excellent position but not interfering with local footfall.

An approach was made to the Town Council, and being forward thinking they agreed we could site it in this position for the two weeks period.

Next hurdle was to arrange transport.

To bring a huge gift box from Westminster, London down to Cirencester required a Luton van. We calculated that to hire a van and get some of our members to drive would cost the best part of £100 each way plus the fuel costs. BUT we struck lucky and one of our members worked diligently to arrange sponsorship for us so we didn’t have to cover that cost.

Having sorted the transport we then needed a team of people to help remove the pieces from the van and erect them on the acquired site. Again a champion arrived, the son in law of one of our members who did a magnificent job of organising the assembling of the box, no mean feat especially as the weather was so hot, but his men had it up within an hour and a half, complete with concrete square floor laid in a grid for stability.

Dismantling the box again our super hero was on hand at 08.00hrs to organise the dismantling and the loading onto the van; supervising another team of helpers, this time from the council.

SECURITY. We were fortunate to have the CCTV cameras trained on our site but especially also to have Cirencester Intruder Alarms to check on the box three times during every night.

Now we were up and ready to go

HOW DID WE MAN THE BOX?

Before the event our Programme Action Officer drew up a Rota for which club members volunteered. The shifts were for three hours. 10 00 to 13 00hrs and13 00 to 16 00hrs -seven days a week.

We did try to do the Friday and Saturday evenings but although we enjoyed sitting in the cool of the church wall the footfall was very light and understandably people were out to party and enjoy themselves. So, learning from this experience we decided not to repeat these evenings the following week

Our Programme Action Officer and myself were there almost all the time. We didn’t need to be as we had our Rota but decided that if we were to be able to give a fully comprehensive report and move the project forward after the gift box was returned to

London this would be the best way for a complete overview.

WHAT WAS OUR FOOTFALL?

We recorded only the people we engaged with for some time (see below chart). By this I mean that we spent some time talking with these people. This would average forty five to fifty a day. However this could be magnified by a third if you counted the fleeting footfall and interested observers. As heard by one of our volunteers…..’ So this is the pink box everyone is talking about’.

Quite a few of local residents thought this sort of thing couldn’t possibly happen in a nice place like Cirencester and comments like – “Surely this only happens in London” were often heard. They were surprised and shocked to discover that we have had recent problems in neighbouring towns and that this can happen anywhere.We had literature from Stop the Traffik, from the Purple Tear Drop campaign and Gloucestershire Supporting Women in Abusive Relationships. We also had leaflets about Soroptimist International and our own club.

DID WE HAVE ANY PROBLEMS?

Surprisingly few, thanks mainly to good organisation and the reliability of all involved with their particular tasks.

The amazingly hot weather was both a hindrance and a help.

The heat made the door to the box expand and when combined with its weight and the need to lift it over a few cobbles it was found that we needed the help from the husband of one member to come in every day to open the box and to close it at the end of play.

Also due to the heat the volunteers first hugged the shade of the church in the morning but were compelled to retreat behind the box during the afternoon. We did notice that around three in the afternoon the footfall dropped enormously when the day was at its hottest.

The flip side to this was the fact that the box was open at the top and had it rained we would have had to close as all the leaflets would have got wet.

At night we put a tarpaulin over the table just to make sure if it rained all will be well WHAT WAS THE OUTCOME OF HOSTING THE BOX?

The media visited us and this raised awareness.

A visit was made by the Regional Programme Action Officer and the Regional Treasurer, both of whom were impressed enough to say they would like their club to host a box.

The Mayor opened the gift box and we were supported by the town council.

Stop the Traffik had a representative visiting on the same day as the Regional Programme Action Officer and Treasurer so was able to communicate directly with them. He was amazed we had managed to open the gift box for as long as we did but we pointed out that we were Soroptimists and work as a team.

WHERE DO WE GO FROM HERE?

Our Programme Action Officer will be in contact with local neighbourhood watch representative for further initiatives.

Stop the Traffik has agreed we can do a painting which we hope will be sponsored for prints . This will not only raise awareness of this huge problem but our own profile too.

We will keep on contact with Stop the Traffik & help further

WHO DO WE THANK?

Jantine at Stop the Traffik for her on going support.

The Mayor and Town Council

All the wonderful Soroptimists, the friends of the Soroptimists and the ladies from the Inner Wheel

UN.GIFT AND STOP THE TRAFFIK ARE WORKING TOGETHER ON THE GIFT BOX PROJECT TO RAISE AWARENESS OF HUMAN TRAFFICKING

WHY DID WE LAUNCH DURING THE OLYMPICS 2012?

Even as the athletes prepare for their arrival in the United Kingdom in pursuit of their dream of winning gold, other men and women are being forced into coming to the country in search of a better future, only to find that for them there is only ever one winner – their trafficker.

It is our responsibly to take this opportunity to alert the world to the reality of this tragic crime; to inspire visitors gathered in this city for the Games of the 30th Olympiad – residents from thousands of towns and cities – to become aware and take action to stop this crime.

After the Olympics the GIFT box will be made available for communities all around the UK and abroad. Community centres, schools, businesses, and all other groups will be able to host a box for a chosen period of time to create their own project around the GIFT box.

WHO IS UN.GIFT?
By encouraging and facilitating cooperation and coordination, UN.GIFT aims to create synergies among the anti-trafficking activities of UN agencies, international organisations and other stakeholders to develop the most efficient and cost-effective tools and good practices. UN.GIFT works to ensure that everybody takes responsibility for this fight.

To find out more about the work of UN.GIFT please visit the UN.GIFT website.

WHO IS STOP THE TRAFFIK?
STOP THE TRAFFIK is a global grassroots movement that prevents human trafficking through campaign-driven community action. Our growing network of activists around the world raises awareness about how human trafficking affects local communities and equips them to take action to tackle it. We build local partnerships with police, authorities, businesses that deliver real change on the ground, and shape international action through our global partnerships with the United Nations and the Serious Organised Crime Agency.

To find out more about our campaigns and help spot and stop the traffik visit the STOP THE TRAFFIK website.

WHAT IS HUMAN TRAFFICKING?

Human trafficking is to be deceived or taken against your will, bought or sold into forced labour or sexual exploitation, domestic servitude, forced marriage, forced begging, removal of organs. Trafficking affects every continent and every country.

Due to the hidden and illegal nature of human trafficking, gathering statistics on the scale of the problem is difficult.