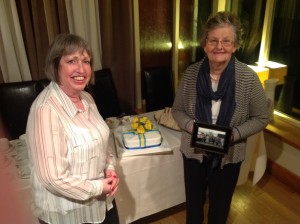 Rhiannon Rogers, a member of Soroptimist International Denbigh, Ruthin and District who lives in Denbigh, (previously Lodge Farm, Denbigh) had a big surprise at a recent meeting when members presented her with gifts and a special cake to thank her and celebrate her 40 years as a member of the club.

She joined the club in 1974 when members had to be invited and seconded in order to join the Soroptimists and she was pleased to be supported by Sister Megan Williams and Gwen Cunnah. Rhiannon was then a partner in a large dairy farming business.

There were two meetings a month then, one with a speaker and the other was a business meeting and over the years the venues for club meetings have included Ruthin craft centre, the King’s Head Llanrhaeadr, Castle Hotel Ruthin, the Bull Hotel, Denbigh and now meetings are held monthly in Brookhouse Mill, Denbigh. There were no trips or visits arranged for club members then and the annual membership fee was £12 when Rhiannon joined the club. All members then had to attend 50% of the meetings or they would be asked to leave the club!

Rhiannon has also played her part in the running of the club. She was President in 1982 and 1983 and really enjoyed it although she feels that current Presidents get much more support from members now than was the practice then. She also attended national conferences in both Glasgow and Edinburgh.

When asked to reflect on how the Soroptimist International Denbigh, Ruthin and District club has changed over the years, Rhiannon said “the club is much more relaxed and much friendlier than used to be. It used to be quite formal, strict with attendance, and formal and smart dress was expected.”

At the annual lunch in Ruthin Castle when she was President, it was very formal with long dresses worn and all the Presidents from visiting clubs were formally announced to the whole room on arrival.

Rhiannon said “I feel that the club has definitely changed for the better. It is less formal, we are doing more things, getting on with them and raising money for a number of local, national and international charities.

I joined the club and found much friendship and I have made a lot of friends over the years. I am still a member as I have joined many different things but always enjoyed Soroptimist InternationalDenbigh, Ruthin and District club as I find them to be very professional people with common sense and I enjoy helping out with fundraising for charities. It is good to feel part of actions that makes a difference to people’s lives. The club has its moments, but every organisation has that!

I also enjoy meeting and working with the new younger members who have recently joined our club.”

Apart from her work with Soroptimists, Rhiannon has also been one of the pals for Ty Croeso Ysbyty Glan Clwyd on a rota for 14 years with duties including preparing the house for the changeover for parents of sick children in the hospital. She met Princess Anne when she visited the facilities at the hospital.
She was also on the North Wales Hospital voluntary rota for many years, making teas for visitors 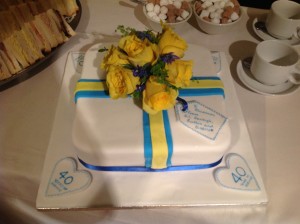 Amongst the gifts presented to Rhiannon by current members were a special celebration cake made by club member Beryl Price from Llangollen and a commemorative framed picture.