Thanks to the wonders of the internet and Zoom, Margaret Ikiara, CEO, of Ciford, Meru Kenya was the guest speaker at our February meeting.

President Frances welcomed SID members and Soroptimists from other UK clubs to the meeting.

Margaret explained that Ciford was established in 2002 to support self sufficiency of the women and families in the north Meru county of Kenya. Margaret discussed the work she and her team do with an increasing number of girls who become teenage mothers. She outlined the risks they run because of poverty and sexual grooming, along with period poverty. A disturbing fact highlighted by Margaret was that a lack of underwear made these girls more vulnerable to rape and sexual abuse.

Ciford organises residential programmes to educate the community about FGM- female genital mutilation- and other issues the aim being  to empower the girls with knowledge and dispel myths. 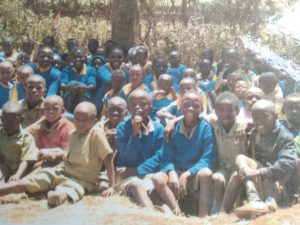 Several of the Zoom guests, who had been visiting ambassadors to the SIGBI Meru Women’s and Garden Project, had met Margaret and had been impressed with her work at Ciford.

Also, Margaret Duffy and Sheila McLuckie, when visiting Meru to update on the progress of Limbene Primary School and St Stephens Kindergarten, had visited both  the SIGBI Project and Ciford. They continued to support Ciford, keeping supporters up to-date with developments.

As with the SIGBI Project, Margaret and her community have been faced with the challenges of the Covid pandemic, drought and locusts.

After responding in detail to questions, Margaret was thanked by Sheila.  Several of the attendees, motivated by Margaret’s talk, have donated to the Ciford Project.