What is toilet twinning?

Some points to note:

SI Dundee members braved the wet weather of the city square to raise awareness of the Toilet Twinning Project among Dundee Christmas shoppers. 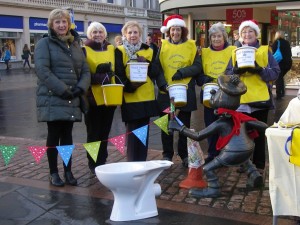 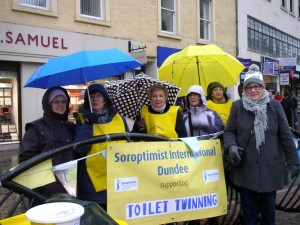 Well done to all who took part.

Club Members persuade the Lord Provost to twin his loo!

Local MSP’s and MP’s signed up to twinning their loos in support of the project. MSP’s Joe Fitzpatrick and Shona Robinson  together with MP’s Chris Low and Stuart Hosie all twinned their loos. Well done SI DUNDEE Team.

Wellgate Shopping Centre – April 30th. SI Dundee members raised awareness among city shoppers of the lack of access to safe sanitation – the plight of billions around the world. Young women are particularly at risk, as they head for the fields first thing in the morning or last thing at night to relieve themselves, from violence and rape.

A very easy solution is for those of us who have a loo to contribute to those who do not. 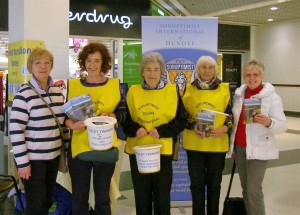 The highlight of the afternoon session at conference was the Programme Action Award. Three projects were shortlisted out of twenty submissions from across Scotland.

SI Dunfermline was this year’s worthy winners receiving the Dorothy Lawrie Cup.  SI Dundee, although runner up ,was delighted to have had two projects shortlisted. 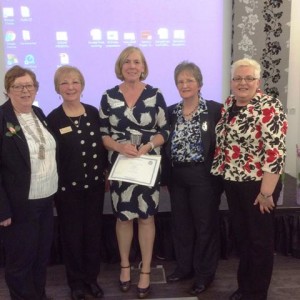 Thanks to the hard work of Programme Action Officer Elaine Ferrie and her team of club volunteers the City of Dundee has become the first Toilet Twinned City in Scotland.

On Tuesday June 3rd ,at Discovery Point in Dundee, the certificate was presented to club President Fiona by Lesley Quirk from the Toilet Twinning Charity.

Afterwards, the toilet on the SS Discovery became the first toilet in Dundee to be twinned with a new toilet in Malawi.

This is only the start of this project. SI Dundee members will continue to encourage, offices, theatres, schools, colleges and individuals to twin their loo in the city.  Then it will be time to look further afield to the county of ANGUS.