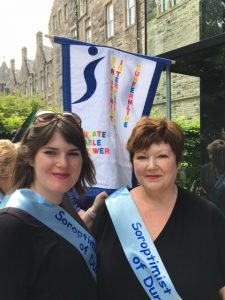 Soroptimist International of Dunfermline has been busy in the run up to Christmas.

Members and their families have risen to the challenge again to allow 70 Christmas Boxes to be delivered  to Frontline Fife and 20 special little gift packages to be handed to Women’s Aid. In addition to this the ladies have managed to create sufficient craft items to sell at the Dalgety Bay Christmas Fayre on Saturday 2nd December. We await an update on this event as the money raised will be added to our charity fund. 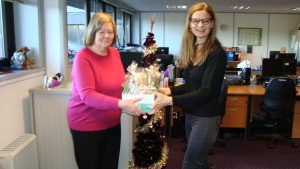 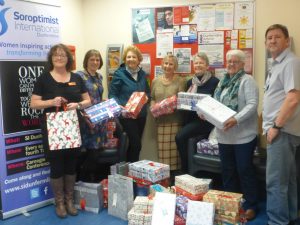 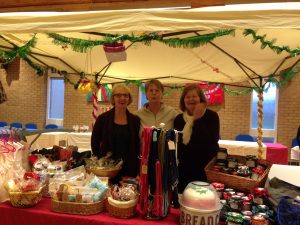 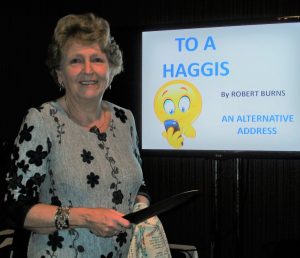 A very successful Jean Armour Supper was held on 26th January by the Dunfermline Soroptimists with 60 members and guests attending at the Carnegie Conference Centre.  This ‘ladies’ only supper was held in honour of Jean Armour who was the wife of Robert Burns  and the evening had a decidedly female view on their lives remembered.  President Helen Lyth welcomed everyone to the evening and set the scene for a night of fun, good food and banter. The company was treated to an alternative version of the ‘Address to the Haggis’, the address being spoken and supported by a visual presentation using the latest text speak, emoticons and animations. This was well received by the company who were then treated to the traditional haggis, neeps and tatties. Our speaker, Joyce Laidlaw provided a very entertaining view of Jean Armour and her relationship with Rabbie Burns, with a number of costume changes, resulting in much laughter and understanding appreciation. The rest of the evening was given over to a number of very amusing recitations with various props, a demonstration of Scottish Country Dances and songs before concluding with some community singing of a variety of Scottish songs. Helen drew the evening to a conclusion thanking the organiser, all the entertainers, the restaurant staff and of course everyone who attended for contributing to the enjoyment and making the evening so much fun. As usual with this type of event bottle tombola was held and substantial funds were raised to support the work undertaken by the Soroptimists of Dunfermline.