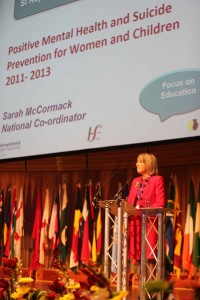 The Republic of Ireland have proved that taking action can be effective without fund raising through their project on suicide prevention and positive mental health.

In Ireland suicide is the biggest cause of death amongst men and women under the age of 35- with a suicide rate ranking 5th in the E.U. 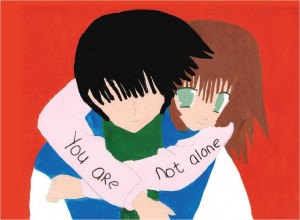 In 2011/2012 SI Mullingar and District selected Suicide Prevention and Positive Mental Health as the local project and partnered with Mullingar Mental Health Association.  During that year a number of different events were organised with the aim of creating an awareness of the importance mental health and suicide prevention.  Three significant events set the future for this to become a national project:

An event on World Mental Health Day brought together all the Voluntary Organisations supporting Mental Health – up to 200 people attended. This event made a huge impact. Soroptimists did interviews for local radio and got signification exposure .

Battle of the Bands connected with the youth as each school was invited to organise their own band and a solo singer to enter “The Battle of the Bands” competition. Soroptimists organised the event – each entry had to present in song or act a mental health message. Over 400 teenage boys and girls attended.

Extension of this project to be the National 2 Year Project

At The National Association meeting in 2011 it was decided that this project should be extended to become the national project for the next two years. Everyone felt that this was a real community project – one that every area needed due to the challenge that suicide is placing on the community.

Meetings with  the National Health Services Executive and National Mental Health Ireland resulted in a formalised liaison with agreed objectives for the project “Suicide Prevention and Positive Mental Health for Women and girls”.

The scale of this project, its effect and successes cannot be gleaned from the database. I was amazed to receive this report on this project when I asked for more information.

An excellent  example of Soroptimists at work. 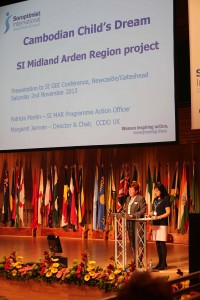 An Adult Literacy centre has been opened too in April 2013. Thirty young mothers are now accessing education for the first time including an assertive grandmother! There is further funding for another twelve months. So thanks to clubs for their donations. 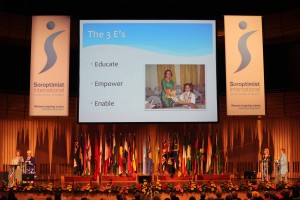 Poetry in Motion. SI Widnes and SI Bangalore have been working together on the Brindavan project which sponsors the education of girls and clearly encompasses the 3 E’s. Funds raised included a sponsored walk to a local monument 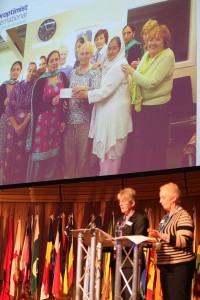 SAME = Soroptimists And Mothers of Eastwood. SI Keighley identified a local school whereby they could make a difference to the local community links between the school and mothers from other cultures.

Common aspects of each others lives and cultures were shared, for example weddings, cooking, sewing and walking in the Yorkshire Dales. Fund raising activities led to the adoption of a school in Pakistan. Various joint activities ensued included marking International Women’s Day, a party for the Queen’s Jubilee, a fashion show and £1,350 raised towards a school mini bus for the school in Pakistan.

The mothers continue to realise their potential and are still flourishing and doing new things such as a holistic health course. SI Karachi emphasised the plus side for the children in the Pakistani school: “Children have a book, a pen and a teacher and are ready to change the world!” 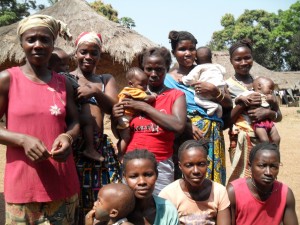 Rose Moriba Simbo, a new member of SI Thames Valley, wanted to stop the practice of FGM. As a sufferer herself, she advised the club how they could help to stop it happening to the Kori Chiefdom women in Sierra Leone.

The club collected clothes for babies, toys, books and cooking utensils. Other organisations, such as the Ladies Circle and the WI have since got involved.  Christmas is the time of year when FGM happens so a shipment of presents are sent to enable a celebration, a coming of age and rite of passage, but without the ‘cutting’.

The Appeal raised £10,000. The women wanted a library and the Sandy Raffan memorial library (late husband of SI Thames Valley member and Trustee of the project, Johanna Raffan MBE) is well underway – the roof is about to go on. A number of villages wanted to join in the project and they wanted a maternity unit, which is the next target. There is a long way to go before FGM is eradicated, but at this project has managed some young girls to say NO TO FGM! 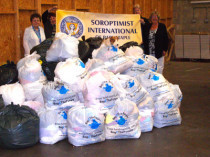 Knickers for Knowledge –  a project in Bulawayo

To enable girls of secondary school age to access safe sanitary protection. It goes without saying how much a girl will miss her education without this help.  Soroptimist collected items for fund raising activities. A website, a charity has been registered, Girl Guides have become involved in the project, and Soroptimists give talks to other organisations in the South West region.

SI Barnstaple were pleased to announce to conference that a sum of £3,500 will be paid into bank account towards the purchase of the first machinery to set up the first factory producing sanitary protection locally in Bulawayo.