Members join their local Club, make friends with like-minded women, have fun and work on projects that help improve the lives of women and girls.

Members select local, national and international projects to work on as a Club.
These projects fit into one of our key Programme Areas:

Some of our activities at SI Glamorgan . . .

Smalls for All is a charity which helps women and children in Africa meet their most basic hygiene and security needs. Because many women and children in Africa can’t afford underwear, they fall victim to disease and attack. And girls who are lucky enough to have a place in school often miss 3 or 4 days a month due to their lack of underwear. Smalls for All donates underwear in many ways – through links with established charities; through hospitals that treat women with conditions like fistula; through IDP camps and children’s homes and orphanages.
www.smallsforall.org

Since September 2015 SI Glamorgan Gwent Marshes has been collecting used bras and new knickers for Smalls for All – more than 3000 bras and 200 pairs of knickers have been handed over so far, with more to come! They have been donated not only by Club members and their friends, but also by church groups, a Slimming World group, a market trader, and Soroptimists throughout the Wales South region. By the time the project came to an end in September 2018 we had sent off over 9,500 new and gently used bras and 500 pairs of new pants!

BAWSO (Black Association of Women Step Out) provides specialist services to women from Black and Ethnic Minority backgrounds who are affected by domestic abuse, and other forms of abuse such as FGM, Forced Marriage, Human Trafficking and Prostitution.
BAWSO runs several refuges and safe houses across Wales and SI GGM members support these on a regular basis, collecting store cupboard foodstuffs, making up emergency wash bags, and contributing towels and bedding.
www.bawso.org.uk

As well as “twinning” the individual toilets of Club Members and friends, the Club has twinned the toilets of the Old Church Rooms in Radyr in order to provide a block of toilets in a developing country.

Club members volunteer at one of the Cardiff Women’s Aid Refuges, maintaining and improving the garden, establishing herb and vegetable beds and within the refuge as “listening ears” and helping the women and children with basic and new skills such as cooking and craft activities.

In addition some Club members have trained with Welsh Women’s Aid as Community “Ask Me” Ambassadors.

Club members campaign collectively on matters affecting Women and Girls and in particular participate each year in the UN 16 days of Activism between the International Day for the Elimination of Violence against Women and Human Rights Day (25th November to 10th December). 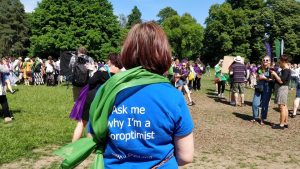