Our nearest business meeting to Orange the World was this week so we donned our orange outfits and considered what we can do to help towards elimination gender based violence. We will also have a display and stand Tomorrow’s Women Wirral on 25th November.

Breast cancer awareness month is a worldwide annual campaign taking place in October, involving thousands of organisations, to highlight the importance of breast awareness, education and research. SI Heswall marked this by ‘thinking pink’ at their October business meeting.

The subject of MDS and Human Trafficking is high on the Soroptimist agenda and we act mainly by raising awareness and lobbying for action.

Some Soroptimist clubs have put notices about trafficking and slavery on the back of toilet doors, in taxis or produced stickers to go on the back of lorries. Leaflets and notices have been produced to distribute. Some of these are aimed at the general public to educate them to spot the signs of slavery, some at victims to let them know where to access help.

Two years ago Soroptimists from all over the UK carried out a survey to measure the awareness of the general public to the crime, and so helped the UK Modern Slavery Training Group to refine and target their training and publicity.

Modern Day Slavery is the illegal trade and exploitation of human beings. It is an umbrella term that encompasses slavery, servitude, forced and compulsory labour and human trafficking.

When men, women and children are forced to work without pay, under threat of violence to them or their loved ones and when it is impossible to walk away – this is Slavery.

It is the fastest growing organised crime in the world. It is estimated that there are nearly 46 million slaves worldwide, with up to 8,000 in the UK. 20-25% of victims in the UK are children. 80% are female. (usually victims of sexual exploitation).

Human Trafficking is defined by the United Nations Protocol as:

It is a global issue and the consequences for its victims are dire – it has overtaken drug trafficking in terms of scale. Trafficking includes the movement of persons from one place to another within the UK, even across cities, e.g. taking young girls to someone’s home for sexual exploitation.

Victims of Slavery and Trafficking may be subjected to:

Spotting the Signs and Indicators

Could victims be living near you?

Who to contact if you suspect Modern Day Slavery is occurring

Do not try to approach the traffickers yourself for fear of frightening them away.

Some of the Club members are supporting President Sue’s involvement in Mary’s Meals (http://marysmeals.org.uk ) by contributing items for inclusion in backpacks. Making dresses to pack is popular and this circle of colour shows  some of them. 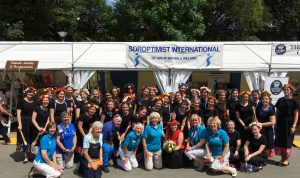 Once again Heswall members went to the Eisteddfod and were part of the Soroptimist team at the SI hospitality tent. This year the Region sponsored a choir from Warsaw in Poland – Alla Polacca. The choir members enjoyed taking part and their stay in Llangollen. Congratulations to them on third place in the folk song competition.

In the Club’s 70th year Presidents Sue and Glenys are planning to make Heswall a toilet-twinned town with fundraising events and local initiatives involving local businesses and organisations. This project was launched at Heswall library with the deputy Mayor of Wirral and his wife, Club members and members of the public. President Sue and some of SI Heswall members had promoted this event by walking around the town centre with President Sue’s ‘toilet on a trolly’ to alert the public. It was well received! Sarah from Toilet Twinning (toilettwinning.org) outlined the work of the charity and wished the Club every success in it its aim of fundraising for 70 toilets in our 70th year. 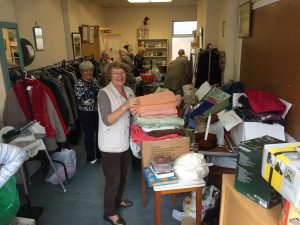 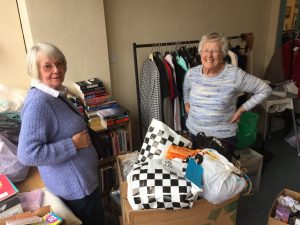 SI Heswall had a busy week running a pop up charity shop in Liscard. Members are shown here setting up for business. Many thanks to all our customers who have helped raise funds for the Alzheimer’s Society  (alzheimers.org.uk) and Wirral Young Carers.

Heswall members are seen here at Ness Gardens enjoying some September sunshine. A pleasant morning – walking round the gardens followed by lunch and a chat!

Presidents Sue and Glenys have chosen Action with Young Carers Wirral as one of the charities the club is supporting this year. They recently  visited the project and presented  a cheque for £600 which was the result of club fundraising.

A lovely way to spend a Sunday afternoon, SI Heswall and District enjoyed a Strawberry Tea event in the garden of member Pam Dowell. Funds raised will go to the Presidents’ Charities.

Neston has a wealth of historic and unusual buildings and the Neston Civic Society has produced a guide to some of the most interesting ones. A group of SI Heswall members enjoyed a summer evening walk following the Neston Town Trail and discovering some unknown parts of Neston! A meal at a local restaurant gave everyone chance to chat and catch up on news.

Paula Hume from Barnardo’s came to the Club’s June dinner meeting to speak about the work supporting young carers in Wirral, one of the Presidents’ charities this year. Action With Young Carers Wirral works with young carers who are caring for a family member who has a physical illness/disability, mental ill health, sensory disability or has problematic use of drugs or alcohol. Paula explained that the Project works within a whole family approach to reduce the negative impact of caring by accessing support for the young carer and family members where there is an identified need. 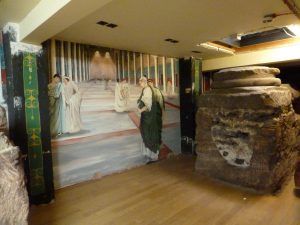 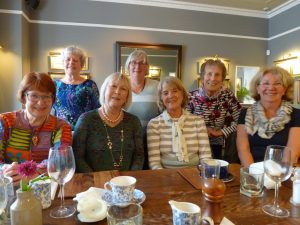 A group of SI Heswall members visited Chester and heard about the history of Deva, the Roman city, on a guided tour.  The pictures show the remains of Roman pillars in the basement of one of the shops and members enjoying a meal together after the tour.