Last year, as a club, we set off on a mission to find a new project. We knew we wanted to support the London 2012 Games and an inspiring female athlete, all we had to do was find one! Lucky for us we found Zoe Newson just down the road in East Bergholt. 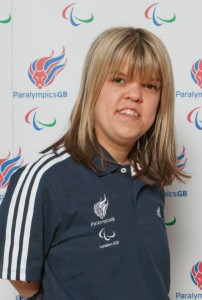 Training for the Paralympics is immensely challenging and we wanted to support Zoe on the way.  We held a Silent Auction in November 2011 which was incredible successful thanks to the amazing work of all the Soroptimists and our guest star auctioneer Mark Murphy. Lots included everything from an Introduction to Bee Keeping to a week’s stay in a Southwold holiday cottage. The final total was topped up Avanti Networking, who donated their Christmas Raffle Collection. We successfully raised over £3000 to help Zoe on the road to London2012.

Update: ZOE TAKES HOME BRONZE!!! We’re so happy to let everyone know that Zoe is taking home a bronze medal from London 2012. It’s been fantastic following the Olympics and Paralympics but it just wouldn’t have been the same without Team GB and Zoe!