In recognition of the International Day of Zero Tolerance to Female Genital Mutilation (FGM) club members signed the e-petition launched by Leyla Hussein.  Leyla is the anti-FGM activist, psychotherapist, a member of the FGM Special Initiative and co-founder of Daughters of Eve, a charity dedicated to ending gender-based violence including FGM.  The e-petition requires 100,000 signatures for the subject to be considered by the UK Government’s Backbench Business Committee for a debate in Parliament.

At least we have done a little to try and help eradicate this despicable practice in the UK.

In addition, a member was able to go and hear Leyla when she spoke at the University Campus Suffolk (UCS) on 13th February to an audience of approx 150 people (about 10 being men).  Her four Channel 4 documentary series ‘The Cruel Cut’ were shown followed by very extensive and interesting Q&A session.

There are practicing communities in the UK even though it has been illegal since 1985.  Girls from the Somalian, Sierra Leonian, Sudanese and Kurdish communities are at greatest risk. 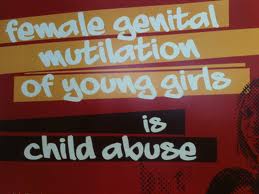 The Government has assigned £250,000 to train all health professionals to ask about FGM to all girls and women who they see.  This will provide badly needed statistics, because the figure quoted of 24,000 girls being at risk in the UK is probably way too low.  It is probably nearer 66,000.

This form of torture and abuse needs to be permanently halted as soon as possible.