An important day for us is International Women’s Day, celebrating the achievements of women and the progress made on gender equality but being ever mindful that there is still a long way to go before we have that status.  We went to 3 events this year – WOW at Cambridge, the Suffolk Feminists Society at UCS Campus, Ipswich and Suffolk Refugee Support celebrations.  See more on this under Programme Action – International Women’s Day 2016

On Saturday 5th March we attended the Women of the World ‘WOW’ event at The Junction in Cambridge.  The highlight for us was the ‘Seen and Not Heard’ session, where a diverse panel of 7 articulate, successful women talked about their work and how gender inequality had impacted their lives. Professor Emma Bell, CRASSH Humanitas Visiting Professsor  conducts research into the subject and gave an illuminating short talk and then the other panel members told us about their experiences.  A typical comment was that a they would make a suggestion in a meeting and it would be put down and then 10 minutes later one of the men makes the same suggestion and everyone is on board.  What should we do – call them out – ‘I said that 10 minutes ago!’  What concerned us was that so many of the prejudices still exist, be it gender, race, beliefs and whilst there has been some progress we need to substantially move forward now.  If we engage more with men at an early age will they see us as more as partners in business and less of a threat?

On Tuesday 8th March the Suffolk Feminists Society hosted an IWD event at UCS Campus, Suffolk.  There was plenty of time to network and key speakers were Deborah Cadman, CEO Suffolk /County Council and Dr Louise Carter, a modern British historian who lectures at UCS and has a particular interest in social and cultural history from 1750-1900 and issues of gender and identity.  Deborah’s story and advice confirmed what we had heard at WOW and even in her current position she still finds her ideas can be dismissed only to then be suggested by a male member of the team (brave man!!).  Louise gave us a short history lesson on feminism and demonstrated how ‘drip, drip’ comments and aspirations from women since the middle ages have contributed to the changes in gender equality that have taken place in the last 100 years. 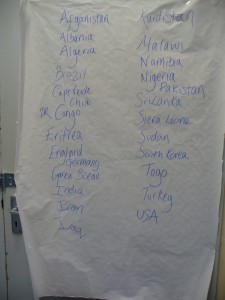 And on IWD day itself we attended Suffolk Refugee Support’s colourful celebrations – an absolute joy to see women of 25 different nationalities, many in their national dress, dancing together.  The food they provided was, as ever, wonderful – a tempting array of flavours and aromas.  If only people who are against immigration could see the benefits these women bring to our country, with their skills and culture. 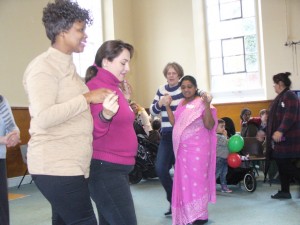