Phrase of the Month:  Soroptimists create awareness about domestic violence

1st      Members of our book club met face to face to discuss “A murder in the Arctic” – our latest book.  It was quite a quick read and, although we generally enjoyed the book, it felt like an introduction to future stories was being set out, by the way it ended.  The opportunity arose to discuss Membership, Communication and Programme Action issues, so the afternoon meeting became quite extended, but it did save having to arrange another three meetings.

4th      Our member Cindy is a great organiser and again held a fundraiser for the Three Roses charity at Lord Morton’s restaurant in Cutnall Green.  We had lunch and entertainment and raised £400.

7.30pm:        Business Meeting: held again face to face at Nightstop Offices in Kidderminster.  Posters had been printed for the 16 Days of Activism for Violence Against Women.  These posters would be distributed in local areas to raise awareness.  We were also asked to wear orange, purchased from a charity shop, for our supper meeting.

11th    Executive Meeting:  held again at Nightstop offices.  Vacancies for Officer positions were first on the agenda, with several vacancies unfilled.  A way forward was discussed, particularly regarding Presidency and Programme Action.  The five P’s came up as a theme for the year with a plan to follow.  The Regional Public Speaking Competition was also on the agenda.

12th    Some of our members have been bag-packing at the Co-op in aid of Homestart and they were able to talk to customers about being a Soroptimist.

14th    Remembrance Day in Kidderminster:  Members took part in the town parade, to and from St Mary’s Church, where a wreath was laid on behalf of the club.

17th    We attended a face to face meeting of the Green Alliance at St Michael’s church in Stourport on Severn.  Advice was given on a sustainable Christmas and there was a discussion and feedback around COP 26 in Glasgow.

18th    Our Supper Meeting at the Brasserie where everyone attending wore orange: 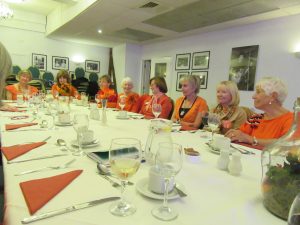 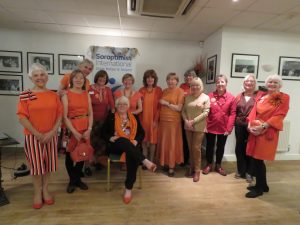 Each member gave information on where they had purchased their outfit and from which charity.  We had collectively given over £100 to charity through our purchases.  After our lovely meal, we watched a video on the environment and the latest information on green energy by John Clark, our Geologist Advisor.

19th    A lovely evening was enjoyed by all at Hagley Country Club tonight at SI Stourbridge’s Literary Dinner.  Three authors spoke of their careers and how they wrote their novels.

23rd    Several members attended a Neighbourhood Watch Zoom meeting after an invite from one of our Soroptimisters.  This meeting was really informative and interesting.  It mainly concentrated on “Streetsafe” – a tool on your phone where any member of the public, but mainly focussed on women, can report areas which feel unsafe.  This is linked to the Police who can inspect the area, patrol if necessary, and then report issues to the local Council e.g. no street lighting, or harassment.  This has evolved since the murder of Sarah Everard.  It is a very good idea, and was well thought out.  It is still being trialled and the organisers are very hopeful of its success and use in future to prevent crimes which women, alone at night have suffered.  Long overdue, I think.

25th    The start of 16 Days of Activism for us:  Federation Office produced excellent posters for clubs to put on Facebook and other social media sites each day for highlight Domestic Violence, Child Marriage, Trafficking and many other acts of abuse which sadly have increased greatly during lockdown.  We distributed posters for display in shops, offices and staff rooms to highlight this campaign.

26th    A Regional meeting was arranged on Zoom by representatives of Midland Arden Regional Committee for all ten clubs to attend and discuss membership and development issues.  It was attended by eight clubs.  The new Regional President, Anne Rogers, was eager to discuss how individual clubs deal with new members and how their clubs are run; what problems occur and how she, and Regional Reps, can help and support us.  It seems there are similar issues in all clubs and it was good to hear that guidance is on hand, should we need the help.  Covid 19 has raised problems for everyone – particularly having to find new venues for meetings.

Club news
About our club
Club History 1948-2021
President’s Message
Community Focus and Projects
Do you like our new club banner?
What’s a Soroptimist?
Contact us