Soroptimist International of Kidderminster & District was chartered in July 1948.  It was sponsored by SI Birmingham Central.  Membership was by invitation only, and members had to be working in management or the professions.  When members retired from work, they became “Past Service” members.  Until 1988, the Club had Annual Dinners, to which all local dignitaries were invited.  Thereafter, celebratory dinners or lunches have taken place every ten years.   It was only in 2013 that the requirement to be working in management or the professions was removed from the requirement for membership.  Photo shows members in 1952 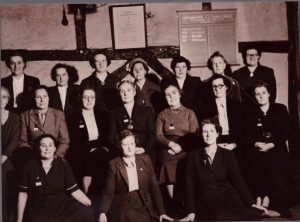 In 1974 the Federation changed its name to Soroptimist International Great Britain & Ireland (SIGBI) and the Midlands area was divided into Midland Arden (our Region) and Midland Chase.  Later, a third region was started called Midland East.  There were three Federations at the time, SIGBI, SI Europe and SI Americas and a new Federation, South West Pacific, was inaugurated.  In 2020 a fourth Federation, SI Africa, was chartered.

Over the years we have supported Midland Arden Region (originally Midland Divisional Union, MDU) and have supplied 2 Regional Presidents, 2 Regional Treasurers, 2 Programme Action Officers and 3 Regional Secretaries.  In 1966 we sponsored a new club in Bromsgrove & Redditch.

We have had several friendship links with other Soroptimist clubs:  Santa Monica in California, Ottawa, Heidelberg, Yeovil, Harare and Vabatsiri.  The most successful of these has been SI Heidelberg and our clubs regularly visit each other to celebrate special events.

SI Kidderminster has always supported projects called for by International Presidents, our Federation, our Region and our club.  We have raised funds for See Solar, Cook Solar; Empowering Girls in Nepal, Meru Garden Project, Freshstart Uganda to name but a few.

We have supported a children’s home, the Hospital League of Friends, Meals on Wheels, Citizens Advice Bureau (CAB), Camphill Village Trust, Barnados, a mother and baby home. The Flying Doctor Service, Acorns, Childline and Women’s Helpline, Kemp, Handicap International (now HI – Humanity and Inclusion) and Wateraid were all supported.  In 1969 we were part of a consortium which started up and ran an Abbeyfield House (assisted living) in Kidderminster.  We published town guides for assisted wheelchair users, distributed by the local Tourist Information Office. 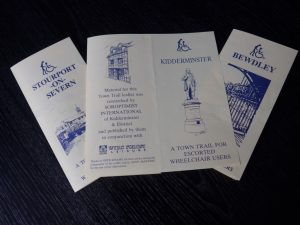 We have provided service to our community, and to other national and international communities.  We filled Red Cross bags for Bangladesh, sent fabrics to the Gilbert & Ellice Islands for the women to make clothes.  We donated equipment for a clinic in the Gambia. We have planted trees in various places throughout the Wyre Forest area and help plant 5000 bulbs in the National Arboretum.  We sent a lorryload of household goods to St. Basils, equipped each of the 5 local high schools with cyber dolls for the “Baby think it over” project.  We have supported the local Foodbank, Cruse Bereavement Care, Homestart, Nightstop and Dial-A-Ride.  We helped the Local Authority by cleaning, repairing and renewing the toys at the local Contact Centre.  We made a quilt for the 2012 London Paralympics which was given to the Herzegovina team.  We were awarded the Mayor’s Pin for making a difference to our community.  Our help was needed in supplying birthing sheets, knitted vests & hats for a midwifery unit in Uganda and dresses and shorts for the orphanage next door.  This was a particularly good project as the items were made by recycling sheets and pillowcases and involved other groups in our community.  We did the Dementia Friends training.

We have worked with a local school to involve the parents.  We did coffee mornings, provided lunches for those children who would normally have had free school meals, ran cooking classes for parents and children, supplied books – especially on International Literacy Day, helped with reading and preparation for SATS tests and gifted a bench for the playground.

We have supported the 16 Days of Activism against Domestic Abuse and we “oranged” the Town Hall to gain attention to this cause. 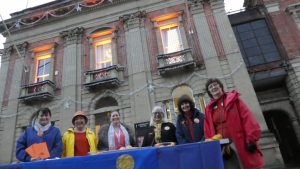 We also supported the Purple Teardrop Campaign to raise awareness of trafficking and managed to get 100 questionnaires completed by the public.  A very successful day conference on FGM (Female Genital Mutilation) was held.

Without fundraising, a lot of our work would not have been possible so we have had talks, open to the public, about the Enigma Machines, Women of the SOE, and with Henry Sandon of The Antiques Roadshow, a couple of afternoon teas with valuations.  We have held Floral Art demonstrations, and a concert to raise funds for the local refuge.  Several Bridge Drives have been held to raise funds for Young Carers, the Stroke Association and Alzheimers.   We have funded the landscaping of the garden at the local refuge where we have supplied many items for the women and children throughout the years.

And so, we come to 2020 and the Covid Pandemic.  We held all our meetings on Zoom, donated what we would have spent on meals at speaker meetings to our charity fund, but still managed to hold fundraisers electronically.  A wine tasting evening was held to raise money for Tarango, a project in Bangladesh.  We also raised money for laptops for the children who were doing schoolwork at home but had no access to computers.  We had cream teas delivered to our homes to raise money for Shared Lives.

The Environment became more important and we had a talk about flooding in the Severn Valley.  We became involved in creating wildlife ponds, planting trees and bee-loving plants.

The success of this club is due to the hard work and dedication of its members for 73 years and long may it continue.

Club news
About our club
Club History 1948-2021
President’s Message
Community Focus and Projects
Do you like our new club banner?
What’s a Soroptimist?
Contact us