#Balance for Better – Walking the Tightrope   by Dr Laura Walton-Williams. A report from SI Nantwich members who went along to the lecture:

It was a very thought provoking talk covering a range of issues including how the use of language impacts on gender equality. 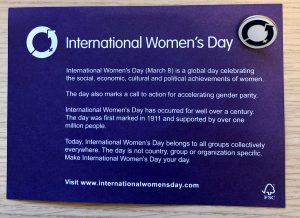 Laura also managed to get the audience engaged through their mobile phones answering questions about the words they associate with women and then men which was a fun way of getting us to think about our own assumptions! The key words for women were ‘STRONG’ and ‘INDEPENDENT’, and ‘STRONG’ was also they key word that came up for men. She also asked us what we thought were the most important issues facing women and girls today. These emerged as ‘equality’, ‘sexism’ and ‘discrimination’. Is that a surprise? What do you think?

On a more serious note, Laura shared some interesting research on the ways that male perpetrators of sexual assault justified their actions; mainly by blaming the woman.

Finally, Laura encouraged us not to be bystanders, not to think we can’t do anything because our experience of life is different, but to use whatever privilege we have, such as education, opportunity, positive attitudes etc to tackle discrimination and promote equality for women.

The lecture was broad ranging and interesting take on issues facing women to mark International Women’s Day in 2019, and well worth attending.

For those eager to know more and see the whole lecture, here is a link to this on FaceBook: 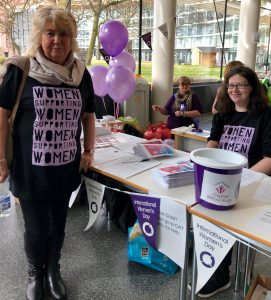 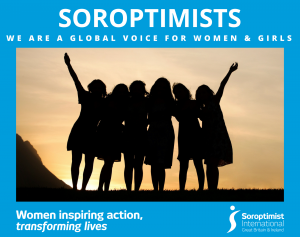 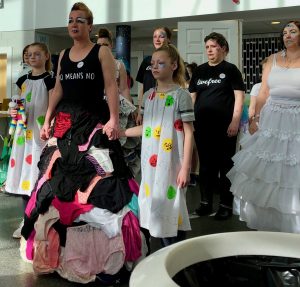 Nantwich and District Soroptimists were part of Crewe Women’s Day at Cheshire College South and West on March 2nd this year – an early celebration of International Women’s Day that is held annually on March 8th to celebrate women’s achievements and help end discrimination against women. This vibrant event was brilliantly organised by Motherwell, https://www.motherwellcheshirecio.com/ a local charity that supports the mental health and wellbeing of Women and Girls. There was a full programme of speakers, events and workshops, including one from Soroptimist Marion Wade on Modern Slavery and lots of exhibitors. The theme was Body Image and Sexual Consent – very important issues to tackle in the current climate. It has to be said though that the tone of the day

Highlights of the day:

Laura Smith MP opened the event, speaking passionately about championing the cause of women’s equality and she came to chat with us at our stand. 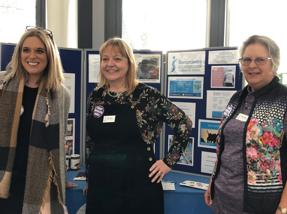 Laura with Soroptimists Cath and Sandra

Sue Piddock-Jones attended a workshop on sex and consent led by Detective Inspector Claire Jenson from Cheshire Police. She said the most useful part of this session was a video (www.youtube.com/watch?v=pZwvrxVavnQ    ‘Consent – it’s as Simple as Tea’) used with people of all ages (even children in Primary school) to help them understand the notion of consent. It used the analogy of asking someone whether they would like a cup of tea – if they said no then we would not force them to drink it, if they said yes but then changed their mind, again we would not force them to drink it. If they were unconscious, we would not pour the tea into their mouth. This was a very powerful way to try and get a difficult concept across.

A number of us watched a short film about the story of the women’s gay liberation movement in Manchester – a fascinating story of two women who were the driving force behind an unstoppable movement, and how they took direct action to raise awareness and also set up, with other women, the first Women’s Refuge in Manchester. Really worth a watch.

Gill Palin and Caroline Marsh went to a session run by the Women’s Equality Party that highlighted some dreadful statistics about women’s participation in the workplace, showing that there is still a long way to go.

Marion’s workshop was well received as she led discussion about modern slavery and what we can do to address this.

A key highlight was the Cheshire Without Abuse https://www.cheshirewithoutabuse.org.uk/  ‘Catwalk of Courage’ with some amazing and inventive costumes and make up on display. The women and girls had all been supported by CWA – one woman told us that it had been ‘the making of me, it saved me’

There were lots of stands besides ours, on the themes of promoting health and wellbeing. It gave us a great opportunity to engage with women who came to the event, as well as other charities, to explain what we do and make connections. We were able to tell people about our 70th Anniversary Conference on 1st June as well, and there are still places available for this. https://sigbi.org/nantwich-and-district/nantwich-district-soroptimists-70th-anniversary/

It was a great day to celebrate women, and see women supporting women in action.