After many years of having our Annual Lunch in Dorney this year we moved to the beautiful setting of the Berystede Hotel in South Ascot.  Despite the rather unseasonal weather members were able to admire the attractive gardens and enjoy a delightful three course meal with their guests including London Chilterns Regional President and the Mayor and Mayoress of the Royal Borough of Windsor & Maidenhead. 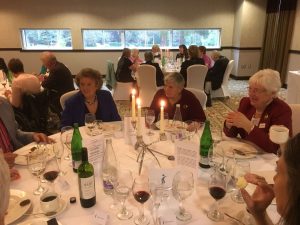 Following traditional toasts to Soroptimist International and Our Guests, Fiona Devine gave a talk about the Alexander Devine Children’s Hospice.  Fiona’s son Alexander died a few years ago having needed treatment for cancer and she then discovered that there was no Children’s hospice in the area of Berkshire.  Having ascertained that there was a significant need for a Hospice devoted to the needs of children (up to the age of 19) she took on the remarkably daunting task of setting one up.  Amazingly the Hospice now exists!  It has six beds and facilities for families to stay overnight and is currently undergoing the appropriate checks regarding safety standards etc.  The anticipation is that the unit will finally open to the public in June of this year.  Fiona has achieved this remarkable goal at the same time as bringing up two other children which many might consider quite challenging enough.  The fundraising has been amazing and many groups have been set up to continue to raise the funds which will be needed to fund the Hospice’s running costs.  Sally Radford who chaired the lunch thanked Fiona for her inspirational talk and presented a cheque for £700 together with flowers. 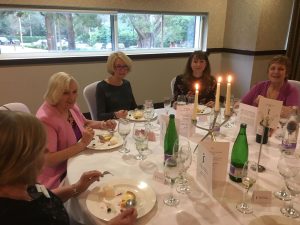 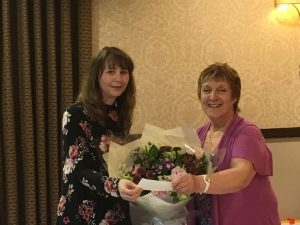 Fiona then helped to draw the raffle which had a first prize of Tea for Four at the Berystede Hotel and was won by Estlyn Davies.