BANGLADESH – There are to date 2019 two clubs in Bangladesh – the first club to be chartered was SI Dhaka in 1983 and SI Dhanmondi, chartered on 23rd February 2013 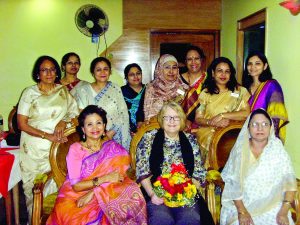 SI Dhaka, Bangladesh was chartered on 5thJanuary 1983 by SIGBI Federation President Thelma de Leeuw who was accompanied by Jean Wishart of SI Kendal, and Aroti Dutt, Padma Lahiri and Ila Ghosh of SI Calcutta, also Kate Goddard of SI Beverley. The President Anjaumanara Begum, an author by profession, had the support of members who were determined from the beginning to “Work together for peace and development” Their main concern was for women and girls who needed help badly , so they started an integrated project in the Eskaton area of Dhaka, comprising a primary school, and adult education centre and centres for health education, family planning, nutrition etc. They were aiming to satisfy material, physical and mental needs

On 23rd February 2013, SIGBI Councillor for Bangladesh Jasmeen Paru Sultana chartered SI Dhanmondi, a new club in the Bangladeshi capital Dhaka. Despite this being a day of protests on the streets of Bangladesh, club members were determined that the charter would go ahead, and the event was a great success, generating considerable local media coverage.