SIGBI has reached the target of £150,000, several months before the official end of the project. All further donations (before 30 September) mean that Child.org will be able to undertake extra work in support of the women and girls of Meru.

Agricultural training is ongoing in land preparation, soil fertility, leadership skills and record-keeping. Training is carried out on the spot in some communities. Also many new skills are covered in-depth so that members can return to their communities and educate their peers.

There is also continuing liaison with key local residents and officials (including chiefs) to aid understanding of the project and its benefits for all in the community.

Young mothers are being educated in reproductive health and nutrition. Weaning has been a particularly well-received topic, as the women realised they needed to change their methods. At each session, over 70 mothers attended. 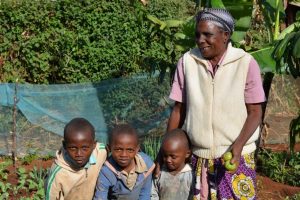 As we are now starting the last year of this project. I pleased to report that we have already well on the road to exceeding our original target of £150,000. This has enabled us to extend our reach.

We planned for 200 people but now will be able to work with 439. More communities will therefore feel the benefit of the project.

We have also been able to extend the scope of the work on training the girls in ‘alternative rites of passage’. Boys are being educated about the positive impact on girls’ health issues that these rites have. Joy and celebration instead of the pain and long-term suffering of genital mutilation.

Motor bikes are also being purchased to enable the trainers to get around the villages quicker. These are easily available and will be maintained locally.

Despite solar ovens and other improvements having been brought to the communities the continuing request from the women is for more water tanks. This proves how important water is, to not only the crops, but to the health of the communities.

I enjoyed meeting Amanijit and Marti (from Child.org) who staffed the Meru stall at the Federation Conference in Cardiff. We talked about the up-to-date situation and about their ideas for the future of this project.

Delegates visiting the stall had the opportunity to watch a video of some of the women in Meru and the work they are undertaking.

The project’s total at the beginning of November stands at £93,530. This figure has given a boost to future expansion of work in Meru.

So far 10 water tanks have been distributed, and another 10 are waiting to go out; a further 20 are to be ordered.

Seminars for the girls are being held so they can learn the facts and dangers of Female Genital Mutilation. Seminars are also run to inform the boys in the community.

After a few problems, we are now having regular reports and updates from Patricia Gatherum (Federation Ambassador) and Amanjit Dhillon (Fundraising Product Officer of Child.org) 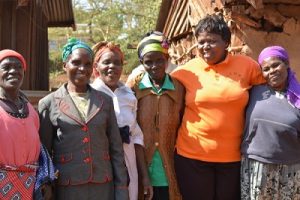 The women involved are working on their plots either alone or in groups. Despite the continual worry about the shortage of water many are growing enough, not only to feed their families, but to sell (to each other or at the local market) thus creating an income.

In addition, the Centre where all the training and meetings take place has plenty of land including a small farm with rabbits.  The CIFORD office where Margaret and her team work also has a small garden. So, overall, there are plenty of areas on which to grow crops.

The Centre has been extended to include a kitchen. The dome building has been decorated in readiness to rent out when not being used for training purposes – the rent will then generate an income.  It is also hoped to create a bore hole at the Centre as more water will help the local community.

I am pleased to report training of the four groups has now begun in the classroom. Shortly this will become practical ‘on the ground’ training. Care is being taken to ensure the curriculum is targeting the correct areas of need.

Currently there are fears that 74% of available water could be contaminated. Therefore, education on the collection and treatment of water will be started. This will improve current practice and safeguard health within the community.

Most women have a hoe of some sort but checks will take place to assess quality. Hoes will be replaced where necessary. Only 18% of women have a wheelbarrow so this will be looked into. The advantages of ‘wheels’ include transporting crops to market, and moving crops on the women’s farms.