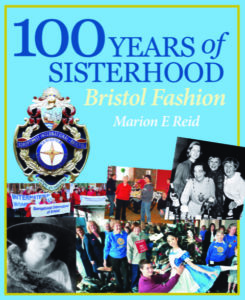 10th May 2020 celebrated the Centenary of the day when a score of Bristol business and professional women met and formed the Venture Service Club for women – a novel concept at that time when many women had no vote. They were helped by the Rotary Club of Bristol whose own Club had been founded only three years earlier. The focus then and now has been on women and girls. In 1930, the six Venture Clubs merged with the Soroptimist Movement founded in America on similar principles in 1921. 100 Years of Sisterhood: Bristol Fashion tells the story of some amazing women and work achieved by them.

By reading their history, it is clear that Soroptimists have supported the needs of underprivileged or vulnerable people locally and abroad and shaped campaigns from Equality for Women to Modern Slavery. By any standard, the number of charities supported during their 100 year existence is impressive. Soroptimists have been at the forefront of social change and worked in a low-key manner with good humour, friendship and fun. The story of this remarkable organisation, which gained Special Consultative status with the UN, is enlivened by memories and anecdotes of many involved with it.

The story of the Bristol Soroptimists is the story of a number of remarkable and pioneering women, many of whom made – and are still making – positive and lasting differences to the lives of others. Marion Reid’s history of their first century is a meticulously researched account combining real-life stories of individual achievement and of collective effort. It deserves to make Bristol more aware of how much it owes the Soroptimists. (Eugene Byrne, Bristol Post)