SI Barnstaple and SI Tiverton played their annual skittle match, this time at North Molton.
Barnstaple won the trophy, for the fifth year running, despite some brilliant skittle arm action by Tiverton.
Good food was provided, and fun and Soroptimist friendship was enjoyed by all. 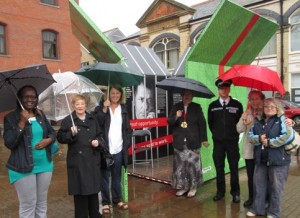 SI Barnstaple hosted a Gift Box for three days, during a period of dire weather.
The Box was opened by the Mayor of Barnstaple, and, along with members of the club was a local Police Detective Inspector and Mpumi, a member of the club’s Friendship Link, SI Bulawayo, Zimbabwe, who was visiting the UK.
215 people visited the Box, with many learning for the first time the true consequences of those victims of Human Trafficking.

February 14
SI Cheltenham
Annual Quiz Night – 3 February in aid of Butterfly Garden
Thanks to all who supported our Quiz Night (18 teams) the total raised for the Butterfly Garden was £617.  Thank you to the Quizmistress, Ursula and her team of markers.