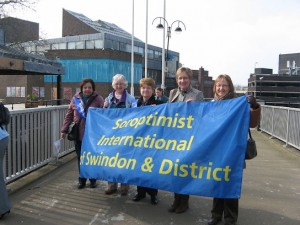 Swindon, originally a small market town,became the hub of the Great Western Railway following the Industrial Revolution.  Until the 1950’s the Railway works was the major employer in Swindon. Following its demise as a railway town, Swindon became one of the fastest expanding towns in Europe.  More recently, Swindon has become known for its numerous roundabouts, including the famous Magic Roundabout!

Soroptimist International of Swindon & District was Chartered in October 1960.  It is a happy friendly club which, while good at retaining members, is keen to recruit new members able to use their talents enthusiastically to improve the lives of women and girls. Members have come from all areas of Swindon and from Marlborough, Corsham Chippenham, Devizes Faringdon and villages in between.

The Club is forward looking and enjoys taking on new projects.  Meeting twice a month on Wednesday evenings, Swindon Soroptimists get to know each other well and over time strong friendships are formed. Varied speakers, good food, interesting discussions and the ability to make a difference for women and girls in the world gives members another dimension in their lives.