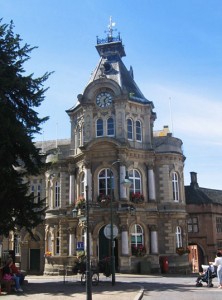 Tiverton is a busy mid Devon market town situated north of Exeter on the A396. The current population is just over 18,000.  Standing on two rivers, the Lowman and the Exe, Tiverton once used this as a source of power for its woollen industry. Much of Tiverton now centres on the Heathcoat Factory, which has been in operation since 1816.   Nowadays the factory makes a variety of fabrics from timing belts to camouflage fabric.

SI Tiverton was chartered 52 years ago and currently has a membership of 23 as well as one honorary member, the Mayoress of Tiverton.   A very strong link has been formed with Petroc College of Further Education and several displays are put on there each year.   Tiverton library and the old Pannier Market are outreaches within the town for our displays and fund-raising stalls.  This year we are putting on a month-long exhibition within Tiverton Museum to coincide with International Women’s Day.

We have Friendship Links with Joondalup in Australia, Kobe in Japan and Gouda in Holland.   In April several members of SI Gouda are coming to Tiverton for a visit.