Plymouth Soroptimists have won the South West Regional Best Practice Award for their work in Programme Action.  This included supporting a village in the Gambia to help build a hospital; adding a dining shelter to the school for the same project in the Gambia; raising awareness of FGM; collecting food and gifts throughout the year to give Christmas bags to elderly and single women and men at a local Daycare centre; marked International Women’s Day in the city centre by displaying 104 pairs of shoes to represent the number of women murdered by their husbands due to Domestic Violence; supporting Trevi House (a Rehab centre for women), where a mother with a disabled son had been discharged from the centre. Members and their husbands painted an empty house and fully furnished it with donations, all in the space of a week; have supported the Mustard Seed charity for the last 10 years by filling shoeboxes for children in Muldova to open on Christmas Day.
Also working with a Nepal-based organisation the Kobila Women’s Project; Dress a Girl Around the World, involving working with Brownies and Guides.
They were presented with the award at the 2016 Regional AGM. 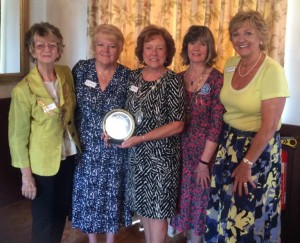