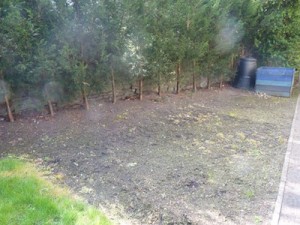 SI Bristol brainstorming how they could best respond to 2015 being Bristol’s year as European Green Capital. A piece of land approximately 20ft by 10ft was identified as ideal for an allotment. It is an Eden House allotment – volunteers from SI Bristol work under the Client Lead’s direction and garden by way of support to the Clients.
Week 1 – 7 April 2015
Four members of SI Bristol met with Penny, the Client Lead. Sue Oakey, a garden and allotment expert also came to advise on how best to plan the allotment and to give other useful gardening tips.
(Click here for latest updates………)

Cecil joined SI Exeter in 1952 and was club President at one time. Following a job move she joined SI Barnstaple in 1971
and has continued to be an active member, seldom missing a meeting.

in need who attend a local diner at which a club member is cook and members have a rota to wash dishes. The bags contained easily heated food and drinks as well as treats and a hat and scarf that had been hand-knitted by a member’s sister and her friends. 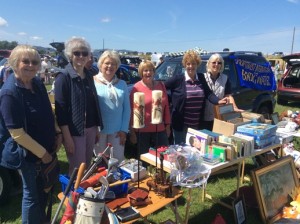 SI Bridgewater held a car boot sale in aid of St Peter’s Life-Line.  This is a small grass roots charity, with the passion and vision to make a big difference, where 100% of your donations reach the school and community. St Peter’s Life-Line partners with St Peter’s primary school and community in Kajuki, Kenya, by helping to lift a community out of desperate poverty, through education, micro finance, empowering girls, feeding programmes, clean water, sanitation and the prevention of disease. We aim to bring Hope Through Education and a more secure future. Our core vision is to ‘Embrace, Educate, Equip & Empower the next Generation’.
SI Swindon
Swindon Club have delivered ten filled Christmas boxes of items for the ladies currently 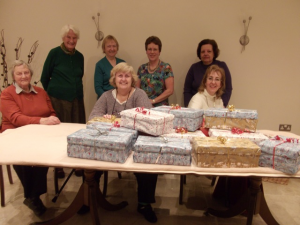 being helped at our local Isis Women’s Centre.  We have also donated some winter
coats which we were told were urgently needed

November 15
SI Cirencester
TWO of the Cotswolds’ most well-known churches were bathed in purple light as part of a crusade to raise awareness of the disease that killed her father. 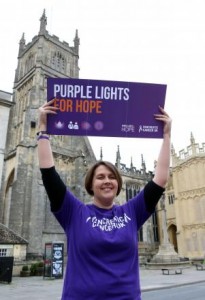 Sue & Sarah Dennis, of West Hay Grove, Kemble, have ensured that Cirencester Parish Church and Kemble Church were flying the flag for Pancreatic Cancer UK on Sunday November 1 as part of the charity’s national Purple Lights for Hope campaign.
Both churches took on a striking purple complexion for the night to raise awareness of the disease which is Britain’s 10th most common cancer, but its fifth most deadly.
Pancreatic cancer is not a well-known disease in Britain, but it is a particularly dangerous type of the disease because its symptoms are often confused for regular stomach pains, meaning it can be diagnosed when it is too late.
Sarah lost her father (& Sue her husband), John Dennis, to pancreatic cancer in July 2013 after he was diagnosed a year earlier. “Before he had the condition we knew very little about it,” Sarah said. “Now I’m on something of a crusade to get people talking about it.”
Purple Lights for Hope was launched last year, with Gloucester Cathedral among the famous landmarks being lit-up, but Sarah was away travelling so could not participate.

This year, however, she is went all out. On Saturday, October 31, the day before the churches take on their new look, Sarah and her mother Sue (a long standing member of SI Cirencester) held an awareness day in Cirencester with stalls set-up outside the parish church and in Bishops Walk.
Sarah has stressed that the team of volunteers, including a number of Soroptimists from SI Cirencester & District as well as Cirencester Rotarians (John was a member) were there to raise awareness first and take donations second. 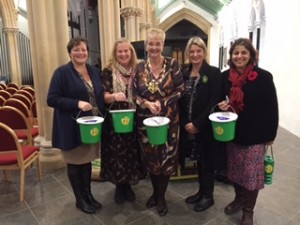 SI Bristol’s President’s charity this year is Special Friends Club, a local charity run by parent volunteers that provides support for families of children with special needs. We have formed a relationship with the charity by meeting the Trustees and by holding a tea party with activities for the children so that we can begin to understand the difficulties that these families face.
Our first major fundraising event was a concert on 14th November where the Harry Browns, a sea shanty group, and Gurt Lush, a large choir, performed. We raised in the region of £2,000 that evening with over 150 people attending the event. The audience was very moved by the talk given by one of the Trustees about the difference that Special Friends Club had made to their lives.” 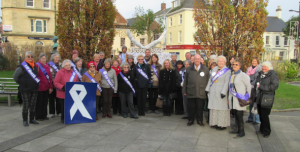 SI Barnstaple organised the annual event that starts Domestic Violence Awareness Week.
A group of men and women from local organisations and the Council heard words of reflection and empowerment read by a member of North Devon Against Domestic Abuse, and members of SI Barnstaple.
Following this, white petals were scattered into the river, in recognition of those women and children who had survived domestic abuse, and in memory of those who had not.

SI Cheltenham
WELCOME TO CAROL, GOODBYE TO MAGGIE!
Newest member Carol Kinchin, who formally joined at our club meeting in November. Our club warmly welcomes you!
We said ‘au revoir’ to club member Maggie Whymark who moved to Norfolk in October. Maggie remains a distant but involved member of our club as she will continue to update our website. 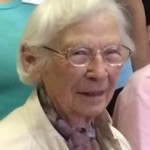 Congratulations Gwen!
Club members expressed their congratulations with chocolates presented to Gwen Owen MBE, who recently celebrated 50 years as a Soroptimist.
SOME OF OUR RECENT EVENTS
We welcomed a speaker IT Schools Africa which is a charity which refurbishes old computers and ships them to schools in Africa.
We marked International Literacy Day by holding a book sale and International Day of Peace by raffling a Peace Lily.
We raised awareness of ovarian cancer and welcomed Jeni Craig and Maggie Morris to give a presentation to members and guests.
We held a Bring and Share Supper, an opportunity to enjoy a social event together
We presented a collection to the Women’s Refuge..  We were able to present them with a large collection of filled toilet bags, bedding, towels and dried goods for use at the Refuge.

October 15
SI Plymouth
Guides, Brownies and Rainbows from across Plymouth have made dresses from pillowslips to send to African countries to celebrate the Day of the Girl Child. Guides have made the dresses, Brownies stitched sewing kits to go with the dresses and the not be left out, the Rainbows donated knickers! 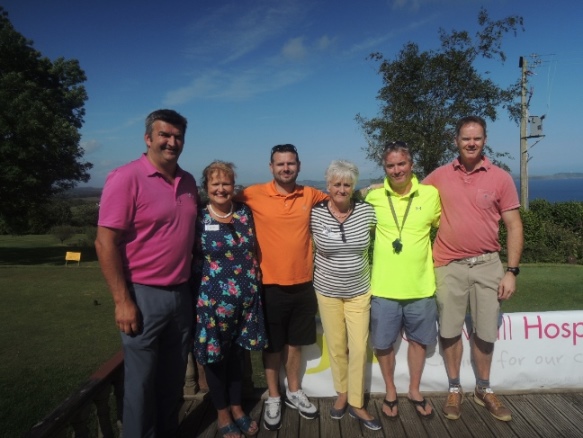 Another busy month for the club. We were delighted to welcome Sandra Heyward as a new member. Also at our July meeting was a representative from the Cornish CharityCLEAR. They provide therapies for children and young people who have been impacted by domestic abuse and sexual violence. On July 4th the club hosted a Charity Golf Day at Porthpean Golf Club raising over £3000 for the Hospice. Members agreed to sponsor Jade Colton a 15 yr old rower who has been chosen for the GB Team in Atlantic Challenge 2016.  Members acted as marshalling volunteers as well as taking part in the Truro Race for Life on July 12th raising £335 for the Charity. Meanwhile members Wendy, Shirley & Mary joined 1600 Soroptimists from all over the world at the International Convention of Soroptimist International in Istanbul. The club planned boat trip from Mevagissey was cancelled because of unfavourable winds but the fish & chip supper still went ahead. On 22nd July the Marine Conservation held  an Ocean plastics awareness day on Fistral beach attended by their President HRH Prince Charles. Our organisation represented by Judith was invited to join them and meet the Royals. We have been taking part in the annual MCS beach clean/survey since 1997.  Finally members volunteered to help with supermarket collections on behalf of Cruse. 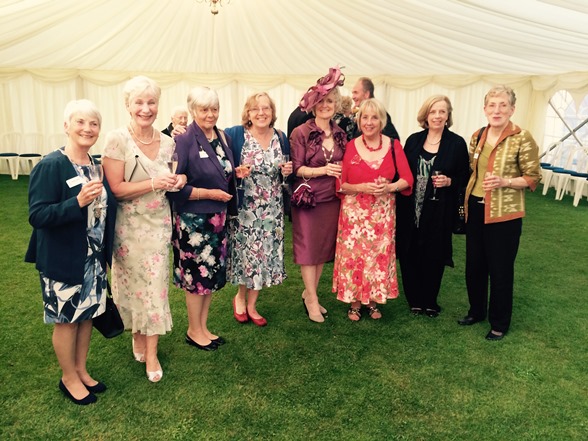 A happy group of ladies who attended the Queens
Brithday at Government House in Jersey in the presence of the Lord
Lieutenant.  The names are as follows; 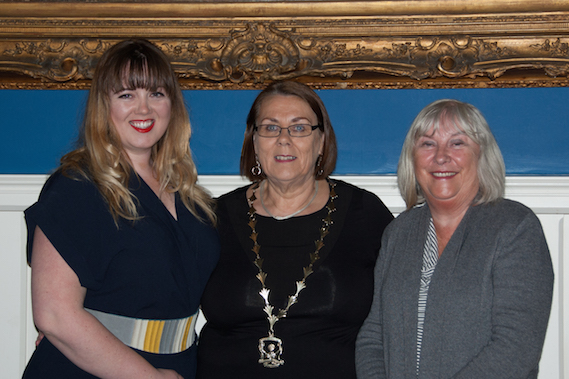 Newly appointed President Kathy welcoming two new members to SI Cirencester.
Lynne Knight and Laura Retttie.  Laura is President Kathy’s daughter! So this was a particularly
special occasion for them both. 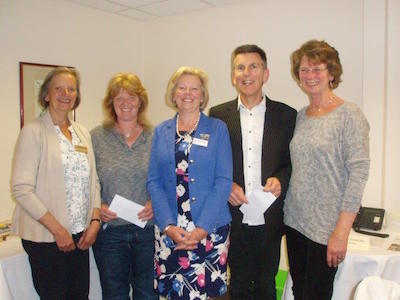 SI Tiverton and District  President, Daphne Dowsing, presented cheques to four charities at the end of her year of office.  Daphne is pictured centre with (from left to right) Bridget Tosh who received a cheque for £400 for Tiverton Sudarban Support Group – (TSSG – is a registered charity, based in Tiverton, Devon,  that supports community development in Sudarban, a remote village in the district of Dinajpur in Northern Bangladesh. This donation will pay the salaries of two teachers for one year); Julie Clarke- received £400  for the Tiverton Market Drop-in Centre (providing support  for a wide selection of services for young people); Phil Lloyd received £400 for UNITE – giving support to Young Carers and lastly Jenny Evans received £200 for Singing to Remember, a Tiverton Group set up to support people suffering from dementia and their carers.

The Soroptimist International club of Tiverton and District has a new President.
She is Di Hill  (right of picture who took over from Daphne Dowsing at the Club’s
AGM in April. Di is at present the Human Resources officer for SI Great Britain
and Ireland while Daphne (left) is vice-president of SI South West and Channel Islands Region

St Austell
1st Business Meeting & Bakery VisitPresidents Maggie & Jane successfully navigated their way through their first meeting. Outgoing President Liz was presented with her past Presidents badge. A collection was made for the SIGBI Emergency relief fund for use in Nepal and a staggering £650 was donated by members at that meeting. Members voted to donate £100 to local girl Caitlin Burnett a 15 yr old promising cricketer. The money will go towards her
participation in a forthcoming cricket tour of South Africa. The social meeting was a visit to the new Academy in Pool, the brainchild of Portreath Baker Marion Symonds. Marion is an inspiration woman, she told us her story and herinvolvement with Meico and the pasty link. 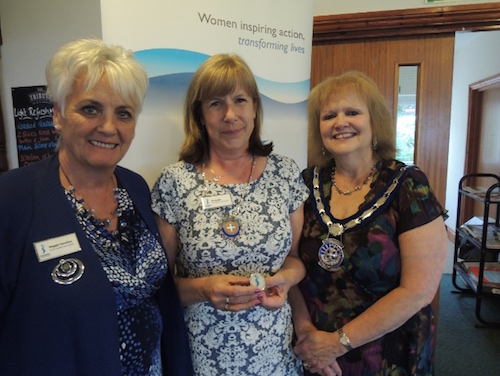 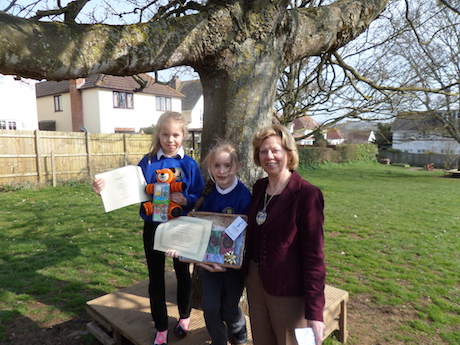 Foundation for many years and are keen to keep the brand’s name alive
in people’s minds. To this end they set a challenge to schoolchildren
in the district to design a wrapper for a Fair Trade chocolate bar.
There were three age group classes – up to 6 years of age; 6 to 10
years old and 10 to 15 years old. A great deal of interest was shown
throughout local schools and 126 entries were received.  Well known
local artist Heatherbell Barlow judged the competition and the picture
shows two of the winners in the 6 to 10 year old class from Littleham
School. They are Lucy Ronchetti aged 8 and Lilly Guest. 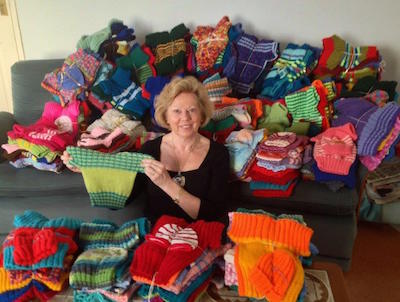 SI Bridgwater:
Supporting No63
For many years S.I.Bridgwater have enjoyed a “friendship weekend” in London, this year visiting the Impressionist exhibition,
an evening at Bel Canto (next to the Club and very enjoyable), then a tour of the BBC studios before returning to Somerset.
We would recommend it to all clubs! 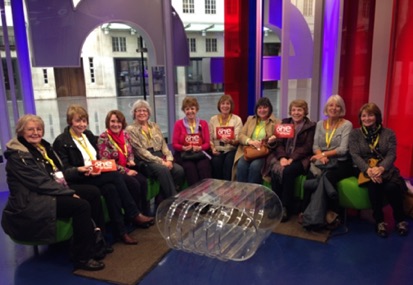 SI Bridgwater
S.I.Bridgwater enjoyed a very interesting visit and tour of the Muller Wiseman dairy and depot. The dairy, which collects and provides milk for the
Midlands and the West Country can pasteurise 100,000L of milk per hour and produces around 1.6 million litres per day.  Amazing! 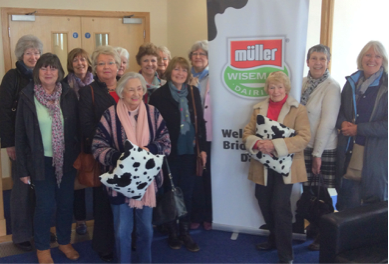 March 15
SI Tiverton and District
Held their President’s night on Saturday March 28 2015.  Picture shows President Daphne Dowsing (left) presenting  a cheque for £100 to Kay Turner, President of SI South West and Channel Islands Region.
The £100 was collected  on Lowman Bridge by members of the Club on International Women’s Day. 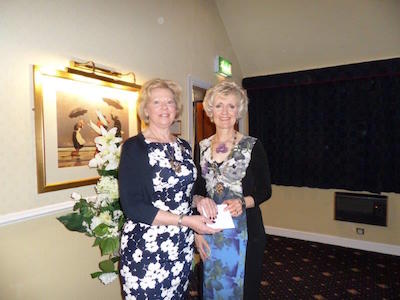 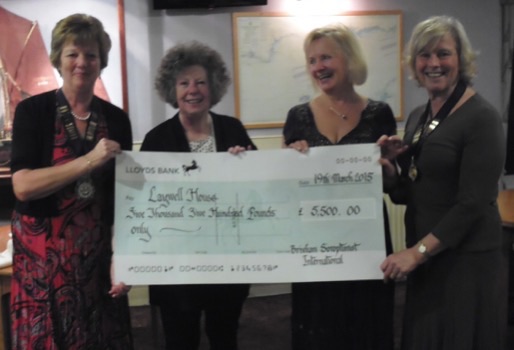 Laywell House was the Soroptimists chosen charity for Chris Hunt’s year
as President and they have collected all year doing various activities such as Fairs on the Quay,
coffee mornings, cream teas, dressing up for A Day At The Races etc A cheque for £5,500 was
handed over to Laywell House’s new Manager Kate Tucker at Brixham Yacht Club on Thursday
19th March. Mrs Tucker thanked the Soroptimists for all their hard work and said how grateful
Laywell House were for this money.