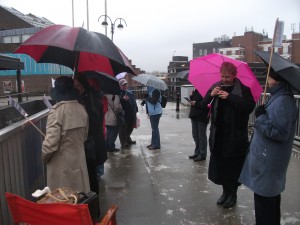 Swindon Soroptimists again organised the “Join me on the Bridge”  event in 2013.  We invited anyone interested in issues of equality, violence against women, women’s health and peace in the world, to join with us on International Women’s Day. We  assembled on the footbridge over Princes Street near the Wyvern Theatre at 12.30pm in pouring rain.

We aimed to show that Swindon people are willing to stand up for women to have equal status in every facet of life here and throughout the world.  We handed out leaflets on issues such as Trafficking, and Ovarian Cancer. We also obtained signatures on the Purple Teardrop Campaign’s Petition against sex for sale advertisements.

8th March 2011 was the Centenary of International Women’s Day.  The Swindon Club organised the first  ‘Join us on the Bridge’ event.  We were on the footbridge over Princes Street in central Swindon (near The Wyvern Theatre).  We joined with thousands of women worldwide to celebrate the day and to draw attention to the inequalities that still exist particularly in Third World Countries.  We wanted to show our solidarity with women throughout the world. So many women are living in poverty and with constant threat of abuse and lack of healthcare. We want to build bridges of peace between nations and within nations.

In 2012 we  again organised a bridge event and everyone who is interested in equality and peace was invited to meet with us on the footbridge over Princes Street in Swindon (by the Wyvern Theatre) on Thursday March 8th 2012 at 12:30pm.

Chris and Sandra on the Bridge

Valerie and Lydia on the Bridge

Preparation for International Women’s Day on the Bridge 2012