The President’s chosen charities were Wiltshire Air Ambulance and the Nelson Trust Women’s Centre in Swindon. Despite reducing numbers of active members we have managed great support for both of these.

In January we were all impressed by the Norwex environmental cleaning products at an event hosted by Jackie and raised £100 in sales and commission for Wilts Air Ambulance. 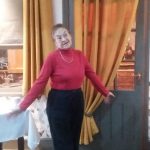 However the most impressive fund raising for Wiltshire Air Ambulance was carried out by President Georgina who went on a sponsored slim losing 7½ stone and raising £565. The total amount for WAA was boosted by kind donation of the Presidents Honorarium and other donations raising a grand total of £1400, which was presented to them in April 2018. 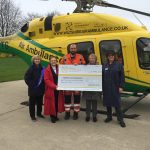 £91.50 was raised by Lydia’s jam sales and donation from Georgina in lieu of cards for the new 2018 Presidents Dec 10th Appeal – Women, Water and Leadership.

After another appeal from Rosa Matherson we also used £100 of existing funds to pay for Freedom Kit Bags for women in Nepal.

Our key focus over the year continues to be the Nelson Trust Women’s Centre in Swindon. We visited in April to donate Easter Eggs which delighted them and gave clothes too. We made regular visits in June, July and November to give clothes, bedding, kitchen items and toiletries and again in Jan 2018.  Jackie and Lydia also spent a half day clearing out their storage room in Jan ’18.  They have moved into bigger premises this year. They have increased staff from 3 to about 13 and still need more space!  In July we gave them £110 out of funds raised to purchase a garden bench for their outside area.

Our key project for them was again Christmas gift shoe boxes, increasing the quantity year on year to 25. Once again an enjoyable evening, hosted by Gillian, was spent creating them. We were helped this year by generous quantities of donations from Marlborough Ladies Who Latte and other Clubs in the Region, but many thanks to all members who donated items and took part in their preparation!

We have continued to give service locally on a monthly basis at the BIG Breakfast for the homeless in Swindon, sending members every month over the year except September. We made one donation of food to the Swindon Food Bank, but access difficulties have lead us to cancel this support. However tins and dry goods are needed by the Women’s Centre for Food parcels and their Lunch Club so we have decided to donate to them instead.

We continue to support UN ‘days’ but due to costs introduced by Swindon Central Library limited our display to International Women’s Day for 2 weeks manning it on March 10th but unfortunately had poor response. Valerie represented us at the IWD Swindon speaker event .

We did have one member attend the wider Regional ‘Railing Against Abuse’ event on Nov 25th for Elimination of Violence Against Women at a march in Bristol, which was well publicised in the media and TV as Dame Joan Collins supported her daughter Tara Arkle who jointly ran the event.

To celebrate International Literacy Day  and to maintain our relationship with Drove school for a fourth year we collected books for their 5 – 8 year olds,. Unfortunately due to weather and unexpected events we have not yet been able to attend an Assembly at the School to officially hand them over.

Three members  supported SI Bath on their event at St Michael’s Church to celebrate 100 years of the vote for Women and were rewarded with very interesting speakers of all ages including the story of a local suffragette.

We continue with the Bookmark Project getting a request from Lancs Youth Offending Team and a couple of schools.

We were pleased to support a Regional PA project, a Trafficking Survey and submitted 52 responses across 6 members, contributing to the 82% contribution made by SWCI.

We were happy to continue our history of sponsorship of girls. We sponsored Jennifer Hunt in May giving her £100 for a Girl Guides project ‘Trefoil Overseas’. We enjoyed her talk to us in January on her visit to Russia.  In October we sponsored Iona Hassan giving her £100 towards her Round World Cycle Challenge and look forward to her talking to us about it in May.

Petitions signed / lobbying
A number of petitions have been signed:

SI Poole (Purple Teardrop) Ban Sex for Sale Advertising – LC (Sept)
Sign petition re continuing ban on pesticides to save bees. LC, JW
Women’s Aid via Campaigns – Stop planned changes to funding for women’s refuges – LC, JK, Jo dM
Protect the rights of vulnerable children and care leavers – JK, JW, LC, GB
TO Michael Gove via 38 Degrees – campaign against Throw away plastic – signed JK / LC
PHSE Relationships and Sex Education – Supported Southend who put a resolution to Conference in 2012 about the introduction of a statutory Relationships Education programme for all children in schools. Club added their name in support and sent to Nicholas Smith, RSE and PSHE team PSHE-RSE.consultation@education.gov.uk
CEDAW – wrote to MP to urge Govt to nominate someone from UK. Response initially from Claire Perry and she forwarded on, then later follow up from Victoria Atkins Minister for Women